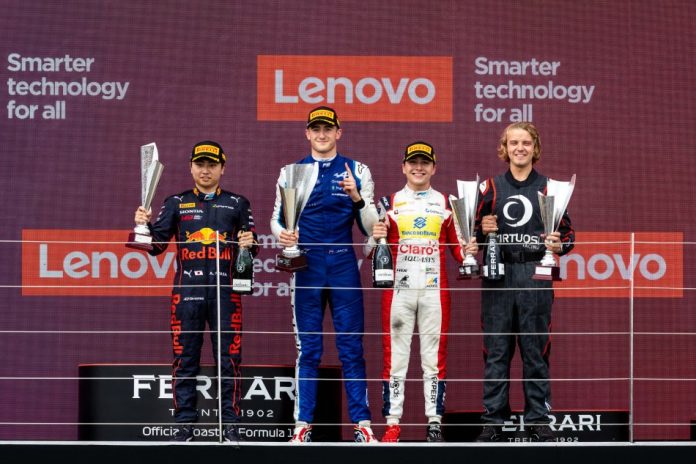 Virtousi Racing’s Jack Doohan was in a class of one around Silverstone after the rain had moved away. With the track surface still wet, the Australian was the most comfortable in tough conditions and made quick progress to take a lead he never gave up after claiming it.

Ayumu Iwasa was another that managed the conditions well as he rose from sixth on the grid to challenge Doohan with a late-race charge. He got within a second of the winner but ran out of laps by the end.

Enzo Fittipaldi claimed a second Formula 2 podium of the season ahead of Théo Pourchaire and Championship leader Felipe Drugovich.

After two formation laps behind the Safety Car gave the drivers a sight of the conditions, Jehan Daruvala led comfortably when the race did get going. As most of the drivers played it safe on the opening lap, Jake Hughes was the only one to capitalise and gain a place. Setting up a switchback on Dennis Hauger out of The Loop, he moved himself up to P12.

Frederik Vesti and Drugovich went into combat on Lap Two and the pair were side by side through Village, banging tyres through The Loop onto the Wellington Straight. Into Brooklands, Vesti dived to the inside and claimed eighth place from the MP Motorsport driver.

As the track continued to dry and drivers complained of overheating wet tyres, Doohan was finding a rhythm. He took third from Jüri Vips into Village on Lap Five, diving down the inside and claiming the place. Daruvala had already been complaining of graining rear tyres and Fittipaldi took full advantage. He dived to the inside of the final corner with more grip to take the lead. Doohan was soon through as well at his favourite passing place in Village.

Ayumu Iwasa relegated Vips to fifth with a great move around the outside of Luffield, finding purchase on the outside line to clear the Hitech Grand Prix driver. He was through on Daruvala into the Vale chicane at the end of the lap, so strong was his pace in the drying conditions.

Once more, Doohan was on the move through the Village-Loop section, this time taking the lead from Fittipaldi on Lap Seven after the Brazilian went deep at Village. Meanwhile, Liam Lawson was struggling massively having sustained front wing damage. He was passed by both ART Grand Prix teammates along with Drugovich to drop him to 9th. Carlin pitted him for repairs that dropped him to last at the end of the lap.

Iwasa caught Fittipaldi on Lap Eight and forced the Charouz Racing System driver to go defensive into Copse. By going offline, Fittipaldi ran wide, and the DAMS driver ducked underneath him to take P2.

Pourchaire was tracking Daruvala for fourth place and dived to the inside at Stowe on Lap Nine. The PREMA driver held it around the outside but a dummy into the Vale chicane opened the door for the Frenchman and he claimed the position. Marino Sato had just cleared Olli Caldwell for P15, but his joy was short-lived. Half a lap later and the Virtuosi Racing driver was forced to peel off and into the support pits to retire from the race with an issue.

Feature Race polesitter Logan Sargeant was up to eighth and into the points with a brave move at Copse on Lap 13. The Carlin driver slipped down the inside of Vips at Copse to make the move stick.

Marcus Armstrong had been pressuring Hauger for P10 for a number of laps and as the rear tyres of the PREMA grained, his defence fell apart on Lap 16. A slide into Turn 3 on a slippery surface allowed Armstrong to set up a move onto the Wellington Straight, swooping around the outside of the Norwegian to gain the spot. Verschoor compounded his woes to take 11th before the lap was over.

Drugovich continued his progress through the top 10, winning out in his battle against Vesti for P6. A great run out of Luffield allowed the MP man down the inside and he claimed the high ground into Copse. One lap later and the Brazilian pulled another impressive move, this time flying around the outside of Daruvala at Stowe to take fifth position. The PREMA man lost another two spots before the end, dropping behind Vesti and Sargeant as his tyres cried enough.

Iwasa was the quickest man on track in the closing laps and he was rapidly closing on Doohan. Entering the final lap, the gap stood at 1.8s. The Japanese driver was pushing hard, getting sideways on corner exit multiple times but couldn’t close the gap in time.

Doohan claimed victory by just 0.9s across the line over Iwasa having led by four seconds at the midway stage.

Fittipaldi held off Pourchaire to claim his second podium of the season while Drugovich ended up four seconds behind his closest rival in the Championship in P5. Vesti and Sargeant followed in sixth and seventh while Daruvala’s disappointing race ended with P8 after starting on pole. Armstrong and Verschoor rounded out the top 10.

“I just won my first Formula 2 race, so I’m absolutely stoked! Difficult day yesterday but we kept cool and stayed positive. The conditions were tricky, but it was key those first few laps to keep it smooth and calm because we knew the track was going to be drying, there was going to be a lot of track evolution and luckily, we did that. I had a great car underneath me so big thank you to the Virtuosi boys. Ayumu made a great charge towards the end but luckily, we managed it just right and I was able to take the win. But it’s only a Sprint Race so all eyes ahead for tomorrow.”

Felipe Drugovich’s Championship lead is down to 48 points, dropping a single point to Pourchaire. The Brazilian is now on 136 and the ART driver now has 88 points. Daruvala and Sargeant remain in third and places with 74 and 63 points respectively. Fittipaldi moves up to fifth with 56 points.

In the Teams’ Standings, MP Motorsport is now on 158 points in the lead from ART, which moves back into second place on 132 points. PREMA slips back to third, now on 129 points.