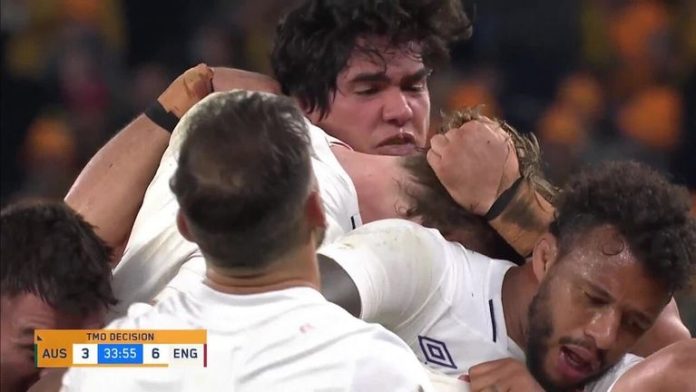 Australia’s Darcy Swain was shown a red card for headbutting England’s Jonny Hill during the first Test; Watch the second Test between Australia and England in Brisbane on Saturday July 9, live on Sky Sports Action from 10.15am

Australia’s Darcy Swain could face a suspension after being ordered to attend an independent disciplinary hearing in the wake of his red card for headbutting Jonny Hill.

The Wallabies second row was dismissed for the off-the-ball incident towards the end of the first half of Saturday’s Test series opener against England in Perth.

Swain’s disciplinary hearing will take place on Tuesday – but Australia head coach Dave Rennie felt his player was subjected to repeated ‘provocation’ prior to the flashpoint at Optus Stadium.

Hill, who was sin-binned at the same time, could be seen pulling the 24-year-old’s hair at one stage earlier in the game.

“I’m not sure if it was a team plan, but there was certainly provocation there,” said Rennie. “Not just in that situation but also earlier in the game.

Despite the loss of Swain, Rennie’s side went on to triumph 30-28 and take a 1-0 lead in the three-match series.

Jones: We should have put the game away

Eddie Jones, under pressure heading down to Australia after a second successive poor Six Nations campaign, cut a disappointed figure after a first England loss to the Wallabies since 2015.

“Well we had enough moments in the game to win it but, at 14-9 with 20 minutes to go, we should have put that game away and we didn’t do that so we are very disappointed in that,” he told Sky Sports at full-time.

“But the commitment from the players is that we now need to win the series 2-1.

“So we will learn from the game and make sure we don’t let them off the hook next time.

“Look, I don’t comment on the referee, he called it [Swain’s red card] that way and that is the way it is.

“Sometimes a red card can work against you because the referee can start to referee differently and we probably didn’t adjust well to that.

“The message at half-time was to put more pressure on them and we did that in spurts but two or three times we were on their line and we didn’t finish it off but Australia, on the contrary, whenever they got in our 22 they finished their movement off.

“We have just got to tidy up our ability to finish in attack and defensively we could have got after them a bit more we feel.

Watch the second Test between Australia and England in Brisbane on Saturday July 9, live on Sky Sports Action from 10.15am.