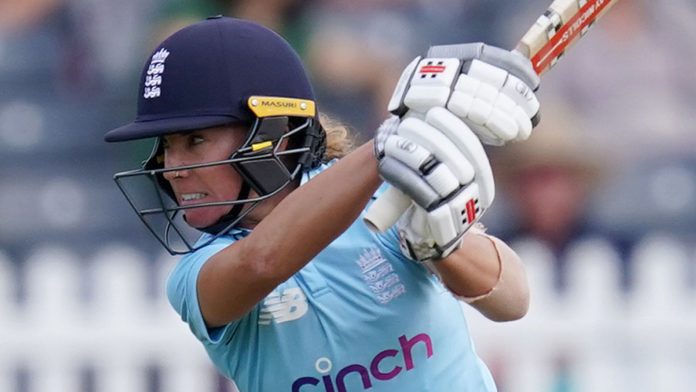 Alongside Hollie Armitage, who hit 46, and Bess Heath, who struck an unbeaten 51, Winfield-Hill ensured the target of 236 was easily chased down with 46 balls remaining, despite the efforts of Thunder’s Emma Lamb, whose 82 was as equally entertaining as that of her rival opening batter.

After Thunder opted to bat first, Diamonds made an early breakthrough when Georgie Boyce was trapped in front by Rachel Slater (1-24) for six with the dismissal bringing West Indies star and new Thunder signing Deandra Dottin to the crease.

Lamb and Dottin had added 55 runs in just over seven overs when Dottin attempted one shot too many and skied a Katie Levick (2-45) delivery to Leigh Kasperek at deep cover for an entertaining 26 off 27 balls.

From then on it was all about Lamb, as the England international unleashed an array of attractive strokes on her way to a fine half-century which saw her bring up 2,000 List A runs when she reached 62, but she fell on 82 – from 80 balls – when she was bowled attempting to hit across the line from Linsey Smith (2-34).

Lamb’s dismissal prompted a stalling of the run rate although Sachi Pai’s unbeaten 41 helped lift the Thunder to 235-7.

Until well into the second half of Diamonds’ reply the result never looked in doubt despite the early departure of Smith for nine after she top-edged a pull shot to Laura Jackson (2-67).

Winfield-Hill dominated Thunder’s bowling as she put on 116 for the second wicket alongside Armitage.

The partnership was eventually broken when Armitage’s late cut off Jackson found Hannah Jones at fly slip and she departed for 46 before Winfield-Hill fell soon after to the left arm spin of Alex Hartley (1-36) when she skied a drive to Georgie Boyce at long off for a brilliant 93 from just 72 deliveries.

When Yvonne Graves departed without scoring, bowled by Jones (1-40), Thunder had a glimmer of hope, but it was soon extinguished as Sterre Kalis (35no) and Heath (51no) steered Diamonds home.