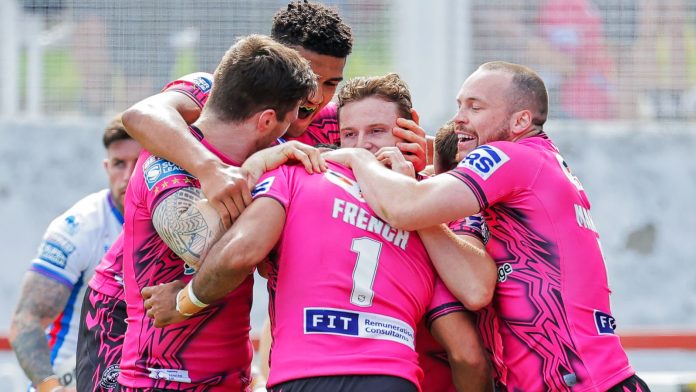 Wigan heaped more misery on relegation-threatened Wakefield with an eight-try 46-22 victory at the Be Well Stadium.

Kai Pearce-Paul, Abbas Miski and Bevan French all grabbed two tries apiece for the Warriors while Harry Smith kicked seven goals as Wigan claimed their fifth victory in a row to move within two points of leaders St Helens.

Trinity gave a Super League debut to Welsh rugby union winger Kyle Evans, who only joined the club on trial in midweek, but it was Wigan who started the better with Smith kicking a 40-20 in just their first set.

It proved telling as in the next set French found Pearce-Paul and the second-rower reached out to score, with Smith adding the extras to make it 6-0.

The visitors extended their lead in the 10th minute when the ball went wide to Pearce-Paul again and he put Liam Marshall over with a smart offload, before Smith took the lead to 12-0.

Four minutes later Wigan had their third try, French feeding Liam Farrell to touch down between the posts.

Smith’s third successful conversion made it 18-0 after just 15 minutes, with huge danger signs for Wakefield.

However, the home side pulled a try back in the 19th minute when Max Jowitt picked the ball up from dummy half and broke through to cross. Mason Lino nailed his kick from the sideline to cut the deficit back to 18-6.

The Trinity comeback continued four minutes later when Lino’s grubber kick was touched down by Jay Pitts and the half-back again added the extras.

The free-scoring nature of the contest saw French then score a sensational solo try, stepping past a handful of defenders to go over, with Smith’s kick taking the lead back to 24-12.

Wakefield’s troubles increased with four minutes left in the half when Lino was sent to the sin-bin for arguing with the referee, and the Warriors took full advantage of their extra man as they swung the ball to the right and found space for Miski to crash over.

Smith hooked his kick from the sideline wide but Wigan still boasted a healthy 28-12 lead at half-time.

Wakefield had to start the second half strongly but it was the Warriors who came out firing, Jai Field finding Miski in the corner for his second try of the game and Smith made no mistake from the sideline to make it 34-12.

Two minutes later Trinity’s defence was in shreds again as French kicked through to cross for his second try and Smith added the extras.

Wakefield managed to stem the bleeding for the next 16 minutes and hit back with a try for debutant Evans, set up by a Lino kick to the corner.

The half-back nailed his conversion to cut the lead to 40-18 and give the home side some small hope.