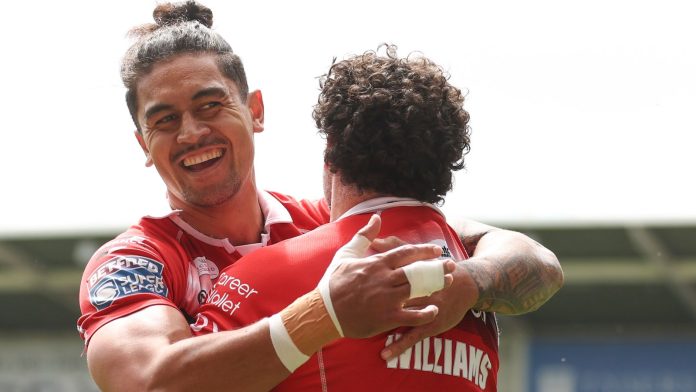 Prop Jack Ormondroyd scored two tries late on for Salford while Chris Atkin and Ryan Brierley also touched down after the break as Paul Rowley’s men picked up only their second away win of the campaign; Warrington looked on course for victory with a 24-8 lead before Red Devils fought back

Salford Red Devils produced a stunning second-half fightback against Warrington to continue their push for a Super League play-off spot, recovering from a 16-point deficit to win 32-24 at the Halliwell Jones Stadium.

Prop Jack Ormondroyd scored two tries late on while Chris Atkin and Ryan Brierley also touched down after the break as Paul Rowley’s men picked up only their second away win of the campaign.

It had looked like Warrington would take full advantage of a yellow card for Salford’s Kallum Watkins on the stroke of half-time as they scored 12 points while the England international was off the field.

But the Wolves collapsed in the final quarter, seeing their lead wiped out by a determined response from Salford who had led 8-0 early in the first half before Warrington hit back.

The home side had Jake Wardle and Greg Minikin making their debuts but they were without the injured Matty Ashton, Kyle Amor and Joe Philbin while half-back George Williams was not included in the 17 despite being named in the 21-man squad.

Winger Joe Burgess, who got a hat-trick in last Sunday’s 74-10 win over Wakefield Trinity, was missing for Salford, meaning a rare start for former Warrington winger Rhys Williams while skipper Elijah Taylor was unavailable due to suspension.

Salford started the game at a tremendous pace with the ball being kept alive at every opportunity and they took the lead after six minutes.

Marc Sneyd’s perfectly-placed high kick was collected by Williams and he cut infield to score.

Sneyd was unable to add the conversion but Salford doubled their lead in the 13th minute as Deon Cross produced a stylish finish on the right after taking a pass from Brierley.

Once again, Sneyd failed to kick the conversion but Salford were good value for their 8-0 lead.

The home side were struggling to build pressure but they were helped by four consecutive penalties which saw them go the length of the field in quick time.

Regardless, they still could not find a way through and Thomas Mikaele lost the ball while trying to touch down in the 26th minute.

Warrington, who failed to score a try in their 4-0 win over Hull FC last time out, finally found a way through a minute later when hooker Daryl Clark spied a gap in the Salford defensive line and raced through from 20 metres, scoring under the posts.

Stefan Ratchford’s conversion cut the deficit to just two points at 8-6 and they were to receive a further boost just before the interval when Salford were reduced to 12 men.

Watkins was shown a yellow card by referee Robert Hicks for obstruction and Warrington almost took immediate advantage as Ken Sio produced a superb tackle to deny Josh Thewlis as he seemed destined to score in the corner.

Warrington would not be denied for much longer though, and only a minute of the second half had been played when they took the lead for the first time.

A superb break out of defence by Joe Bullock saw the forward make 60 metres and with Salford struggling to scramble back in defence, Ratchford was able to reach over for a try which he also converted.

Wardle was then denied by a last-ditch Brierley tackle but Warrington kept play moving and Gareth Widdop was able to score under the posts from close range, with Ratchford adding the extras.

Watkins returned from the sin-bin in the 50th minute but Warrington continued to dominate and they scored a fourth try moments later.

Exciting prospect Thewlis did brilliantly to kick ahead and regather the ball to score in the corner.

Ratchford’s conversion made it 24-8 and Warrington looked well on course for victory However, Salford responded with a superb try to get back into the game.

Watkins did brilliantly to get his pass away in the tackle and the supporting Atkin forced his way over.

Sneyd’s conversion was his first from three attempts and cut Warrington’s lead to 10 points with 25 minutes remaining.

Two tries in three minutes from Ormondroyd then turned the game decisively in Salford’s favour and with Sneyd converting both, the Red Devils led 26-24.

And, with time almost up, Salford sealed a famous win when Brierley went racing under the posts for a try which was again converted by Sneyd.

Salt pummels Pakistan – but will he start at T20 World Cup?

ETRC: season to conclude this weekend at Jarama

Hurricane Ian has killed at least 17 people in the US...

A Bunch of Famous Guys Put on Tuxes for George Clooney...

The 29 Best Long-Sleeve Tees for Men Who Appreciate a Functional...