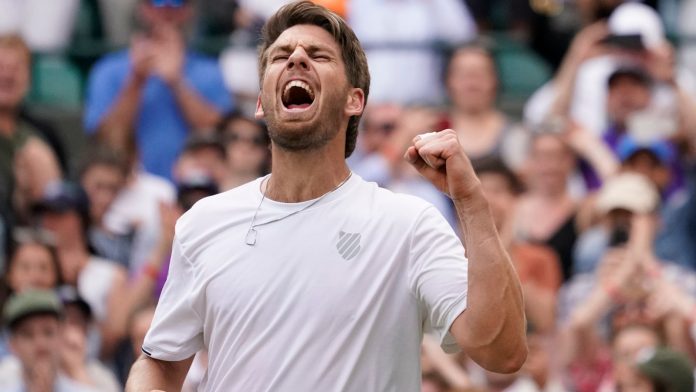 Cameron Norrie makes it through to a Wimbledon quarter-final showdown with Belgian David Goffin; Heather Watson’s run is ended in the fourth round by Centre Court debutant Jule Niemeier; Roger Federer says he hopes to play one more time at the All England Club before retiring from tennis

Cameron Norrie reached the quarter-finals at a Grand Slam for the first time in 19 attempts at Wimbledon on middle Sunday, but Heather Watson’s run was ended by Centre Court debutant Jule Niemeier.

The ninth seed had eased past another American, Steve Johnson, in the third round and he built on that with another excellent performance on No 1 Court, beating 30th seed Paul 6-4 7-5 6-4.

Having never previously been past the third round at a Grand Slam, Norrie is thriving on his first deep run and will be favoured to go further, with unseeded Belgian David Goffin his opponent in the last eight.

“To make the quarters for the first time, in front of my family and friends here from college is so special,” Norrie said on court amid loud applause from the crowd.

“In a huge match, to play the way I did, was really good. To execute everything. I really enjoyed it. It is pretty crazy, I have a lot of feelings.”

Norrie is known for his consistency and relentless athleticism but his forehand was the key weapon here from the moment he drilled a pass down the line on the first point.

Paul, also looking to reach his first Grand Slam quarter-final, was facing a fourth consecutive left-handed opponent and had chosen Norrie as his practice partner to prepare for the previous three, so the 26-year-old’s game would not have come as a surprise.

Finding an answer, though, was another matter. Paul forced four break points in the sixth game but each time Norrie was rock solid, and that proved to be the American’s only chance to draw level in the opening set.

The second set followed a similar pattern until Norrie displayed his first signs of tension, failing to serve it out at 5-4.

It was Paul’s chance to really put his opponent under pressure but instead he played his worst service game of the match to give Norrie another opportunity, and this time he made no mistake.

The sort of tension in the crowd that often accompanies a British player at Wimbledon was absent, with Norrie appearing in complete control, and another early break in the third was enough to send him through to the last eight in style.

British No 4 Watson enjoyed a memorable run to the last 16, her best showing in any Grand Slam.

But a quarter-final spot proved beyond the 30-year-old from Guernsey as German youngster Niemeier won 6-2 6-4.

Niemeier, 22, may be unseeded but she beat No 2 seed Anett Kontaveit in the second round, and illustrated her quality with a stunning winner from the baseline as she chased down a Watson lob.

It was a flat first set from Watson, who was broken twice and swatted the net in frustration after missing a simple volley to bring up set point.

Home hopes were briefly raised when Watson confidently broke for a 2-0 lead in the second, but she was unable to back it up and double-faulted as Niemeier hit straight back.

Two more double faults in her next service game spelled the end for Watson as Niemeier, ranked 97 and playing at only her second Grand Slam tournament, wrapped up victory in an hour and 17 minutes.

“I’ll keep plugging away, as I always do. I’ve been around a long time now, and I hope to be around at least a bit longer”

Watson said: “Immediately after walking off the court, I was obviously extremely disappointed. I’ve taken every match here as a big opportunity and managed to take advantage of it until today.

“But credit to my opponent. I felt like she played really well, especially in that first set. Very flawless tennis.”

She hopes her career-best Grand Slam run can lead to bigger and better things.

The 30-year-old said: “I think in the women’s game, often people are breaking through later.

“I think experience counts for a lot. Everybody’s journey is different. This is mine. I broke a barrier this week. So I am definitely hungry for more.

“I believe in my tennis and my game. I still really enjoy it, I think that’s really important. So I’ll keep plugging away, as I always do. I’ve been around a long time now, and I hope to be around at least a bit longer.”

Niemeier will next face 103rd-ranked Tatjana Maria in an all-German clash.

Maria, who came back from maternity leave just under a year ago, continued her dream run as she battled from a set down, saving two match points in the second set, to overcome former French Open champion Jelena Ostapenko 5-7 7-5 7-5.

Unseeded Belgian Goffin reached the quarter-finals for the first time since 2019, coming through a gruelling encounter against American Frances Tiafoe with a thrilling 7-6 (7-3) 5-7 5-7 6-4 7-5 win in four hours and 36 minutes.

Roger Federer received a standing ovation as he returned to Wimbledon to lead a celebration to mark 100 years of Centre Court.

Absent from the tournament this year for the first time since 1997 as he continues his recovery from knee surgery, Federer received the biggest cheer in a parade of former champions.

Swiss great Federer gave a characteristically humble speech, saying he felt “awkward” to return to the court without playing and he had “missed” Wimbledon this year.

“I hope I can come back one more time,” the 20-time Grand Slam winner, who is out with a knee injury, told the audience.

“The knee has been rough on me but I’ve been happy at home, it’s been a good year.”

There were some notable absentees, including seven-time singles champions Pete Sampras and Serena Williams and nine-time winner Martina Navratilova, who has been forced to stay away from the All England Club after testing positive for coronavirus.