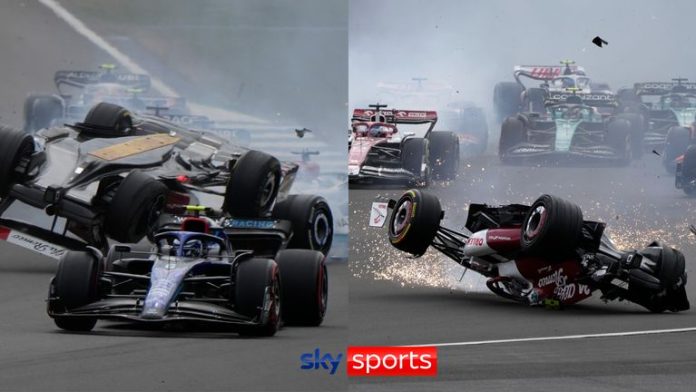 Carlos Sainz sealed his first Formula 1 victory in an astonishing British Grand Prix, as a frightening first-lap crash preceded an incident-packed race with Lewis Hamilton battling at the front, Charles Leclerc losing his lead late on, and Max Verstappen falling back with Red Bull damage.

A Silverstone epic started in dramatic circumstances as a multi-car crash saw Zhou Guanyu’s Alfa Romeo flip upside down and over the tyre barriers, with the Alfa Romeo driver thankfully unhurt after a trip to hospital.

After a lengthy red flag, pole-sitter Sainz twice looked to have lost his big chance behind Verstappen early on and Leclerc later, but a Safety Car then played into his hands and he overtook his Ferrari team-mate for the win.

Ferrari controversially did not pit Leclerc, who had fine pace despite major damage from fighting the Red Bulls at the start, for fresh tyres like Sainz.

Hamilton was also right in contention at his home race in a Mercedes that was often fastest on track, but after some feisty battles with Sergio Perez he was forced to settle for third place behind the Red Bull.

“Lewis was on it today, one of his days but we managed to hold on,” said Sainz, claiming his first win in his 150th start.

“I gave it everything,” added an exhausted Hamilton. “They were just too quick for us.”

Perez, who suffered early damage from Leclerc and fell to 13th, survived an investigation for his driving as the Mexican, Hamilton and Leclerc were involved in F1’s own version of ‘Wacky Races’ for the final 10 laps after the restart.

Not involved in that thrilling fight was Verstappen. The Dutchman took the lead at the start but then suffered a pit-stop-inducing puncture and structural damage to his car.

Verstappen, who also had contact with Leclerc, managed to finish the race in seventh, with his title lead over Perez only cut to 34 points.

Fernando Alonso did get in on the action and finished fifth for Alpine, ahead of McLaren’s Lando Norris. Fellow Brit George Russell was the driver who hit Zhou at the start, enforced by a tag from Pierre Gasly, and had to retire.

British-born Alex Albon was caught up in a separate collision, and has gone to hospital for precautionary checks.

Only 14 drivers finished the race, while Mick Schumacher managed to score his first F1 points for Haas in eighth, very nearly overtaking Verstappen through the final corners.

Scary start to the British GP before Verstappen woe

It was an incredible race at Silverstone, but one that started with a horrifying crash.

After lights out, Gasly tried to squeeze in between Russell and Zhou before backing out but nudging the Mercedes, which then in turn hit the Alfa Romeo. Dramatically, Zhou’s car flipped upside down and skidded along the gravel, before launching over the barriers and hitting the debris fence. It was then wedged in between the two.

Russell rushed over to see if he could help, while there were no immediate replays afterwards as F1 waited to hear on Zhou’s condition, and drivers waited nervously back in the pits after the red flag.

Thankfully, Zhou was stretchered away and was moving, while Alfa Romeo confirmed he was conscious throughout. He returned to the paddock later after hospital checks, with the Halo – which separated Zhou’s helmet from the track and then gravel – possibly saving another life. Also at the start, Sebastian Vettel hit Albon, pushing him into Yuki Tsunoda and Esteban Ocon.

A sell-out crowd over over 140,000 had to wait nearly an hour for the race restart, which saw the grid return to their qualifying order due to the red flag despite Verstappen passing Sainz at the first start. At the next start, Sainz somehow held off Verstappen before there were two clumsy Leclerc collisions – first when trying to pass the Red Bull of Perez and then the Red Bull of Verstappen.

Verstappen didn’t seem to have much damage of DRS and chased down Sainz before a mistake from the Spaniard out of Beckets gave the Red Bull lead. But it didn’t last long.

Seeming to pick up a puncture through those same high-speed corners, Verstappen was re-overtaken by Sainz before pitting, though it then became apparent he had fundamental car damage and eventually did well just to finish the race, let alone score points.

Hamilton gets close to surprise win in improved Merc

Hamilton and Mercedes hadn’t been in race contention all season before Sunday but they had a great chance at the British GP.

With Leclerc stuck behind Sainz, Hamilton cut the Ferraris lead and was posting fastest lap after fastest lap before Sainz’s stop. Hamilton was then a second behind Leclerc in a true fight for the lead before the Monegasque pitted, and the seven-time champion then extended his stint.

Hamilton stopped with 20 laps remaining and seemed in great position to hunt down the Ferraris.

A Safety Car for Ocon’s reliability stoppage was initially seen as good news for Hamilton as it cut the gaps, but it also allowed Sainz to stop for soft tyres, deleting Hamilton’s tyre advantage.

Hopes of a record ninth win then disappeared with Hamilton passed by Perez at the restart, while Sainz got ahead of Leclerc and sped away. Hamilton still savoured an equal best result of the season in third after passing Leclerc himself, following a thrilling three-way fight with the Ferrari and Perez.

Leclerc had significant damage to his front wing after his early clashes but was still faster than Sainz on Sunday, and appeared to be heading towards a well-deserved win after Ferrari finally instructed Sainz to let his team-mate past due to the threat of Hamilton.

But after the Safety Car, Ferrari raised eyebrows by deciding not to pit Leclerc for the soft tyres, with those behind him coming in.

That left the title contender a sitting duck to Sainz and then ultimately Perez and Hamilton despite his best efforts.

Leclerc had been frustrated by Ferrari’s strategy throughout the race and team boss Mattia Binotto was seen having a stern word with him afterwards, although both tried to play the encounter down.

Either way, it didn’t appear to make much sense not to pit both drivers, given that even if Hamilton had stayed out – both would have had a big tyre advantage to get back ahead.

F1’s European season continues at pace with the Austrian GP next weekend – where we see the return of the Sprint. Qualifying is on Friday night before the Sprint race on Saturday, which sets the grid for Sunday’s race at 2pm.

Watch all the action live on Sky Sports F1.