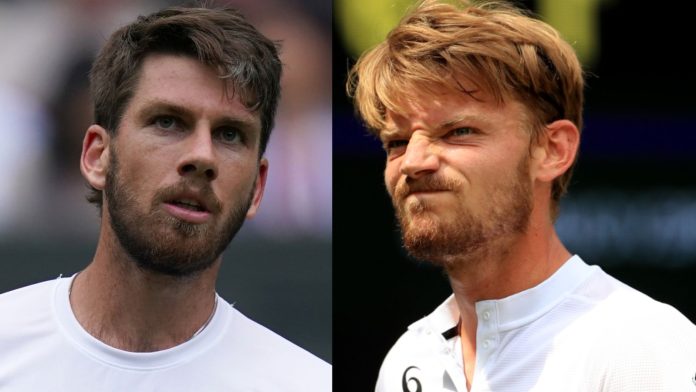 British No 1 Cameron Norrie prepares for the biggest match of his Grand Slam career when he takes on Belgium’s David Goffin for a spot in the Wimbledon semi-finals; Join us for live game-by-game updates from Norrie’s quarter-final clash with Goffin on Tuesday

Cameron Norrie is carrying the torch alone but the British No 1 has high hopes of reaching his maiden Grand Slam semi-final when he takes on David Goffin at Wimbledon on Tuesday.

Norrie, seeded ninth after a tremendous 18 months, beat Pablo Andujar before coming from two sets to one down to beat Jaume Munar in the second round.

But the 26-year-old has been rock solid in beating Steve Johnson before producing his best performance of the fortnight so far to defeat American 30th seed Tommy Paul 6-4 7-5 6-4 and set up another very winnable match against Belgian Goffin.

“I feel like I’m improving and my level is getting better. Definitely a little bit more calm in the bigger matches. It’s nice to do it that way round”

Heather Watson’s defeat on Centre Court earlier on Sunday had left Norrie in the increasingly familiar situation of being the last Briton standing.

Asked about carrying the torch alone, Norrie said: “I’ll take it. At the beginning of the tournament, you guys were asking me, ‘You’re British No 1, you got a lot of pressure, a lot of expectations on your shoulders’. For me to play the way that I did in all my matches so far means a lot.

“Unfortunately I’m the last one standing. But I think it’s even more reason for everyone to get behind me. The atmosphere was great today and definitely helped me get over the line there.

“Especially on that last game, I was obviously pretty nervous. I was serving for my first quarter-final of a Slam. I wanted to get it done there.”

Goffin is a high-class opponent at his best having been a top-10 player and now a four-time Grand Slam quarter-finalist, but he has been badly affected by injuries recently.

Norrie is certainly not ready to end his Wimbledon adventure yet, saying: “It’s great to be through to the quarters. But no reason to be satisfied. I want to keep pushing.

“I’m looking forward to the next match. Another challenge. Very experienced player. There’s still a long way to go, but pretty nice to tick the box making the quarters.

“I feel like I’m improving and my level is getting better. Definitely a little bit more calm in the bigger matches. It’s nice to do it that way round.”

Goffin, 31, missed Wimbledon last year because of an ankle injury and was then out for several months with a knee problem, but he reached the quarter-finals for the first time since 2019, coming through a gruelling five-set encounter against American Frances Tiafoe in four hours and 36 minutes.

Now the 31-year-old, ranked 58, is looking forward to his big day on Centre Court when he tackles Norrie and the ‘whole country’.

“Another British, against Cameron. He played less than me. He played well from the start of the tournament. He played really well. He’s very consistent. He’s a tough opponent to play, but I will try to recover. That’s the most important now, today and tomorrow, try to be ready to play against the whole country.”

He will join Andy Murray, Tim Henman and Roger Taylor as the only British men to reach the semi-finals of the men’s singles at the All England Club in the Open Era.

Getting to know Cam…

Johannesburg-born Norrie, 26, speaks with a Kiwi accent after growing up in Auckland, New Zealand, with his Welsh mother Helen and Scottish father David, and attending university in the US.

Though from South Africa, he is currently Britain’s No 1 tennis player and the last singles team GB star left in the championships.

He was cheered on by his girlfriend, Louise Jacobi, from the sidelines.

When asked how British he felt at a press conference following his win, Norrie said: “It’s pretty interesting, my background obviously from various places.

“I think ever since college I’ve been living here – I’m enjoying it. It’s pretty similar to the people and the sports and everything.

“I love rugby, the cricket. I’m feeling pretty at home. It’s been great to follow all the sports here. It’s been good.”