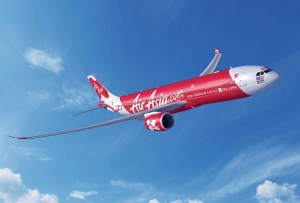 The region’s fastest growing travel and lifestyle platform, the airasia Super App is offering the chance to be a part of THE MATCH Bangkok Century Cup 2022, that is sure to be an historic event between football giants Manchester United and Liverpool F.C. With an opening show by Jackson Wang, the match is taking place this 12 July 2022 at the Rajamangala Stadium here.

Rudy Khaw, Chief Brand Officer, airasia Super App said:“Both Manchester United and Liverpool F.C are world class teams with huge international fan bases and airasia Super App is thrilled to be a partner for THE MATCH Bangkok Century Cup 2022 in Thailand.  Combining the best of sport and entertainment with the opening show by Jackson Wang preceding the game so it’s sure to be a sell out event.”

airasia Super App users and Thai AirAsia guests who use any of the service on the airasia Super App between 30 June and 6 July 2022 will stand the chance to win tickets to the sought after event, to join in the excitement.

To be in to win, airasia Super App users will just need to:

Use airasia food with code THEMATCH to receive a 22THB discount on orders from 160THB.

>The top two users of THEMATCH code will receive 1 THE MATCH ticket worth 20,000 THB each.

The top 6 highest value SNAP (Fly+Stay) users during the campaign will receive 1 THE MATCH ticket worth 20,000 THB each.

The top 1-16 most AirAsia flight bookings (FD domestic and international flights) will receive 1 THE MATCH ticket worth 20,000 THB each.