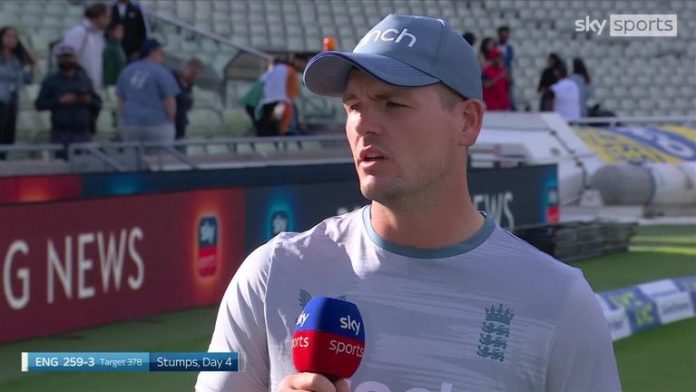 England batter Alex Lees has backed his team-mates to complete a remarkable run chase against India after helping to put the home side in an “unbelievable position” going into the final day.

England were left chasing what would become their highest Test target of 378 after bowling India out for 245 shortly after lunch on day four, and a brilliant century opening stand between Lees and Zak Crawley provided the perfect platform.

Three wickets – including an unfortunate run out for Lees on 56 – fell for just two runs either side of tea, but Joe Root (76no) and Jonny Bairstow (72no) batted through to the close to leave England needing just another 119 to win and level the series – delayed from last summer – at 2-2.

“We’re obviously in an unbelievable position within this game,” Lees told Sky Sports after the close of play at Edgbaston.

“Obviously, Jonny’s in the form of his life and Rooty doesn’t stop churning runs.

“I think that first hour will be really important, but I’m backing everybody from 1-11 that we should get over the line.”

“During this summer, I think the boys have bowled so well as a unit,” Lees said.

“We came this morning, just with an idea that we could bowl them out, and regardless of what they get, we’re going to have a good go to chase.”

Asked specifically about his Durham team-mate Stokes, Lees added: “With bat and ball he’s obviously a match-winner, and he came on and got us right back in the game.”

Shastri: India could have batted England out of the game

While there was delight in the England ranks following their fightback, India will be left to consider whether they got their tactics wrong with both bat and ball.

Former India head coach Ravi Shastri, who was in charge of India for the first four games of the series last summer before stepping down in November, was critical of how the tourists batted on day four.

“I think (it was) disappointing, to say the least, because they could have batted England out of this contest,” said Shastri, who is part of the Sky Sports Cricket team at Edgbaston.

“They needed to bat two sessions and I thought they were defensive, they were timid today, especially after lunch.

“Even after they had lost those wickets, they could have taken some chances. Runs were important at that stage of the game and I thought they just went into a shell, lost those wickets too quickly, and gave enough time for England to bat today.”

Former England captain Kevin Pietersen was disappointed at the tactics employed by India’s stand-in captain Jasprit Bumrah, who was given the role for this game after Rohit Sharma tested positive for Covid-19.

Pietersen felt Root and Bairstow were faced with overly defensive fields throughout their innings, which allowed them to rotate strike far too easily.

“I don’t think Bumrah got his tactics right today at all, and I say that with the greatest deal of respect,” Pietersen said.

“There is no way with a reverse swinging ball that he should make it that easy for the batter, because the batter is trying so hard to decipher which way that ball is swinging.

Pietersen urged Bumrah to take a different approach on Tuesday morning, when England will attempt to seal victory.

“I hope they don’t do it tomorrow morning, but for England’s sake, absolutely, let them spread them as far as they want.”

Watch the fifth and final day of the rescheduled fifth LV= Insurance Test between England and India, at Edgbaston, live on Sky Sports Cricket on Tuesday. Coverage starts at 9.45am, with play getting under way at 10.30am.

Mirjana Spoljaric Egger assumes the presidency of the International Committee of...