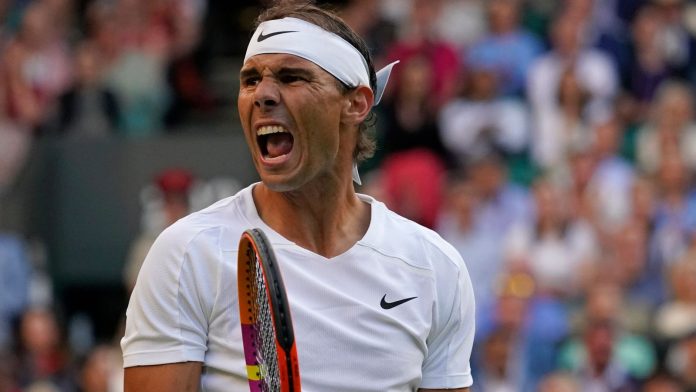 Rafael Nadal, the 22-time Grand Slam champion, makes it through to his 47th major quarter-final and his eighth at Wimbledon; the Spaniard faces Taylor Fritz in a repeat of their Indian Wells final which the American won

Rafael Nadal marched into his eighth Wimbledon quarter-final where he will meet Taylor Fritz, while 2019 winner Simona Halep made a ruthless return to Centre Court.

Nadal had defeated Dutchman Botic van de Zandschulp on his way to the French Open title last month and he repeated the trick at the All England Club with an efficient 6-4 6-2 7-6 (8-6) victory.

Success over the Dutchman in two hours and 22 minutes saw proceedings on Centre Court end two hours before the 11pm curfew that almost left defending champion Novak Djokovic in limbo on Sunday, and ensured the Spaniard stayed on course for the calendar year Grand Slam.

Fritz, who has yet to drop a set in the tournament, said: “My first grand slam quarter-final, that’s really a big deal.

“Part of the final eight and… I’m glad I could get the win on the Fourth of July, being American.”

It was Fritz’s eighth straight victory on grass after winning the Wimbledon warm-up tournament in Eastbourne.

Simona Halep, playing on Centre Court for the first time since winning the title in 2019, reached the quarter-finals with a 6-1 6-2 victory over world No 4 Paula Badosa to extend her winning streak at the All England Club to 11 matches.

The Romanian smashed 17 winners, kept a tab on her errors and broke Badosa’s serve five times to close out the victory in just under an hour.

“It was the place that I wanted to be today. I think I played a great match,” Halep said. “It’s always tough to play against her, she’s a great player.

“Always nervous before, but I enjoyed a lot to be back on Centre Court, in front of this beautiful crowd, always supporting me. It’s a pleasure to be back here.”

Badosa’s shock defeat means No 3 seed Ons Jabeur is the only top-10 seed left in the women’s tournament.

Halep will meet Amanda Anisimova, the last remaining American woman in the singles, for a place in Thursday’s semi-finals.

Anisimova, 20, ended the fairy-tale debut of Harmony Tan as the Frenchwoman was beaten 6-2 6-3.

But she was no match for 20th seed Anisimova whose powerful baseline game got the job done in 74 minutes.

Moscow-born Elena Rybakina is also through after beating Petra Martic of Croatia 7-5 6-3.

Rybakina, 23, is able to compete at Wimbledon despite the ban on Russian players as she switched allegiance to Kazakhstan in 2018.

The 17th seed has yet to drop a set this fortnight and said: “I’m really happy that all these matches I managed to win in two sets.

“I didn’t start the grass season well in two other tournaments but I knew that the surface suits my game very good and in the end I’m just trying to enjoy every match I play.”