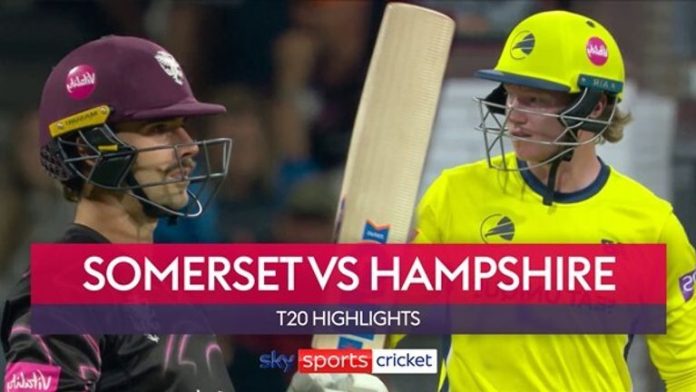 One of the best weeks of the domestic cricket calendar is upon us, with four places at the Vitality Blast Finals Day up for grabs; watch all four quarter-finals live on Sky Sports Cricket, starting with Wednesday’s clash between Surrey and Yorkshire at 6:30pm

A week of thrilling domestic T20 action is in store as the Vitality Blast quarter-finals are contested, with four Finals Day places at stake.

Starting on Wednesday evening, Sky Sports will show each of the four last-eight ties live, with the winners advancing to Finals Day at Edgbaston on July 16.

With English cricket enjoying the start of a new era, under new captains and head coaches in both Tests and the shorter formats, there is no better time to watch the domestic game, for a look at stars of the past, present and future.

Surrey were undoubtedly the stand-out team in the group stage of this year’s Blast. They went unbeaten in their first 10 games – winning nine with the other one stopped by rain – to take complete control of the South Group.

However, with their place in the knockout stages secured at that point, three losses followed in their final four fixtures. The question is whether, with the intensity ramped back up for the quarter-finals, they can rediscover their early tournament form.

In their favour is the fact they remain unbeaten at The Oval, which is where they will – as group winners – host Yorkshire on Wednesday evening.

A stuttering group stage campaign saw Yorkshire scrape into the knockout stages, with a points deduction for Leicestershire crucial in their progression to the last eight.

A host of England players will miss this one as they have joined up with Jos Buttler’s team for Thursday’s series opener against India, including Surrey captain Chris Jordan and his opposite number David Willey.

Surrey will also be without Sam Curran, Jason Roy and Reece Topley, while Yorkshire lose Harry Brook and Dawid Malan.

Given those absences, Surrey will lean on opening batter Will Jacks and the spin of West Indies international Sunil Narine, while Yorkshire will look to New Zealand batter Finn Allen to get them off to a flier at the top of the innings.

The winners of the North Group, Birmingham Bears, are the only team in the competition that have the possibility of playing the rest of their matches at home, with Edgbaston hosting Finals Day.

The Bears, perhaps lacking a little in star power, have relied upon a range of contributions to establish their highly impressive group stage record.

Adam Hose, who is the tournament’s third-highest run-scorer, has been their standout with the bat, while Jacob Lintott occupies the same position in the wicket-taking standings after claiming 22 dismissals.

The Bears face a stiff test in Hampshire, who won nine games in the fiercely contested South Group to secure fourth place.

The Hawks can boast the leading run-scorer in the tournament, captain James Vince, who has amassed a hugely impressive 622 runs at an average of above 56.

The performance of the former England batter may well be a decisive factor in this one.

Old Trafford will host a rematch of the 2019 quarter-final, on which occasion the Eagles triumphed before going on to take the title.

Lancashire, who will be without England’s Phil Salt, will rely heavily on the experience they have in their ranks.

Essex will come into the game full of confidence after their star batter Dan Lawrence struck a brilliant 71 from just 37 balls to help them to a dominant victory in their final group match against Glamorgan last week.

With the ball, they will need the nous of captain Simon Harmer, who has led the way for them with 16 wickets in this season’s competition.

The final tie, at a slightly later time of 7pm on Saturday evening, sees the second-placed teams from each group face off.

Somerset will look to Rilee Rossouw to continue to lead their batting line-up, with the South African having scored more than 500 at an average of above 46 to this point in the tournament.

Tom Banton has been out of form, averaging under 20, but will be looking to make an impact on this primetime occasion in an attempt to re-establish his England credentials.

With the ball, Somerset should have Craig Overton back from England’s Test team, while they can also call upon the vast experience of Australian Peter Siddle.

Derbyshire’s batting has been led by former Pakistan batter Shan Masood, who is the tournament’s second-highest scorer behind Vince, while Wayne Madsen has been in fine form at No 3.

George Scrimshaw has been their leading wicket-taker with 21 dismissals, but will need to watch his economy, with the 24-year-old having gone at almost 9.5 an over so far in the tournament.