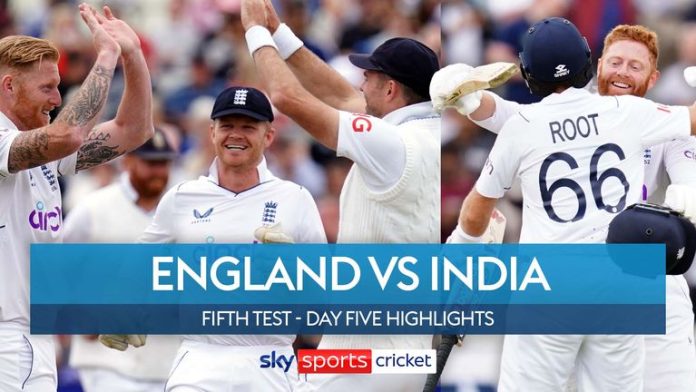 This was supposed to be the chase that proved too tough.

Knocking off 277, 299 and 296 in successive matches against New Zealand was one thing but an England-record 378? Against India? Against Jasprit Bumrah and Mohammed Shami and Ravindra Jadeja?

“Even the most cynical of curmudgeons will feel evangelical about ‘Bazball’ if England pull this off,” said Sky Sports Cricket’s Mark Butcher at lunch on day four at Edgbaston with India already 361 runs to this good. “This bowling attack is a level above the New Zealand one England decimated.”

Fast forward a little under 24 hours and India’s bowling unit had been decimated. England did not really ‘reach’ their target. They obliterated it. In 76.4 overs. They had the best part of five sessions available to them and required less than three. It was done before lunch on day five.

It is remarkable to think a side who made scraping above 200 look like the most difficult thing in the world during the Ashes now sprinting to nearly 400 in no time to win a fourth straight game with largely the same players.

It is amazing to see what a change of leadership, a few fresh faces and a philosophy of positivity, simplicity, fun and fearlessness can achieve.

England have gone from trampled on to trailblazers under captain Ben Stokes and coach Brendon McCullum. From rock bottom to “rock stars”.

“Ben wants us to be entertainers. He’s mentioned trying to be rock stars on the field,” said former skipper Joe Root, who hit an unbeaten 142 and shared an unbroken 269-run partnership with Jonny Bairstow (114no) as England clinched a 2-2 series draw with India in stunning style.

“It’s about trying to have fun and relishing every opportunity you get to showcase what you’re about and put on a show. It’s like being a kid again.

“We are ruthless, which is something we might have lacked in recent times – especially under my leadership! Now we have got someone in charge who knows what they are doing it is way better!”

It’s not just go out there and blaze it. There are some simple little things we keep close as a team. Look at Bairstow and Root. Every decision they have made is pure dominance. Whether that is leaving, defending, reverse-scooping or hitting over the top.

Stokes has been at the heart of the revival. ‘Bazball’ may be named after McCullum but it has been lived to the max by the captain.

“The message to everyone is to just be even more positive than we were last week,” said Stokes after his charges started the summer with a win over New Zealand at Lord’s. That missive certainly filtered down. Since then, England have twice battered the Black Caps and now annihilated India.

We saw exactly what ‘positivity’ really means on the final two days of the Edgbaston Test, as Alex Lees, Zak Crawley, Root and Bairstow played their parts in a slice of England history. Positivity in attack but also in defence and decision-making. That is at the core of ‘Bazball’.

For Lees, it was positivity in attack, as he raced to a 44-ball fifty – the fourth fastest by an England opener – and got the chase off to a rollicking start. Charging Shami, reverse-sweeping Jadeja, as he and fellow opener Crawley shared a century stand in under 20 overs.

For Crawley, it was positivity in decision-making. Having been routinely nicked off in the channel outside off stump this summer, he parked the booming drive during an intelligent but still brisk second innings, which made his demise, shouldering arms to a Bumrah nip-backer, rather cruel.

The McCullum and Stokes influence has allowed Lees to emerge from his shell, while it may just have convinced Crawley it is okay to go back into his every now and again, particularly against the swinging ball early on. Crawley did that here and India ended up bowling to his strengths.

Once Crawley, Lees and Ollie Pope had departed – Lees barbecued by Root during a calamitous run out – it was over to the former England captain and Bairstow to rebuild at 109-3 and then race towards the finishing line. The Yorkshire pair unbeaten at the end of a chase for the second week in a row.

Yes, Bairstow laced the second delivery he faced, bowled by Jadeja, for four but from the 30 balls England encountered immediately after Lees’ run out, they scored just 13 runs. Bairstow’s four was the only boundary.

Root and Bairstow absorbed the pressure before applying it back on India in droves. By stumps, England required just 119. At midday on day five, the game was over, as Bairstow and Root sealed a record triumph with ease.

Root’s hundred was his 28th in Tests and 11th since January 2021, while Bairstow’s was his fourth in five innings. He may well have made that five in five had he not run out of time during the Headingley chase against New Zealand. Bairstow ending that game on 71 not out from 44 deliveries.

It is perhaps hard to calculate how much of an impact Bazball has had on Root. He was scoring this freely, this stylishly, this regularly before McCullum arrived and Stokes became captain, albeit maybe with not quite as many audacious reverse ramps as we have seen in recent matches.

But this cultural shift appears to have had a profound impact on Bairstow.

Jonny is on another level. He is the type of player I’m sure every Test team would want in their middle order. I think he has been rewarded for the clarity and confidence he has now got. You look at how he plays one-day cricket when he knows exactly what he has to do. He has been up and down the order in Tests but now knows what is wanted of him and has been phenomenal.

He is settled at No 5 and seemingly permanently settled at the crease. Across his last five innings, he has amassed 589 runs at an average of 196. Makes you wonder what his Test career could have been up to this point had he not been messed around so much by England over the years…

Butcher said of Bairstow during the Edgbaston Test: “He is slowing down time. The bowling feels like 50 or 60mph to him whereas to everyone else it is 90mph. He is doing that because his decision-making is laser sharp.

“Anything on a good length he is defending but every time the ball moves out of that zone – either short or full – it is disappearing.

“He has been discriminatory in that he is able to siphon out the deliveries that are in the danger zone and then utterly disrespecting everything else. That is when you know you are in batting nirvana.”

England are experiencing cricketing nirvana right now and instilling trepidation in their opponents, according to Stokes.

I don’t think anyone can really understand what has happened. When you get given clarity in what you want to do and achieve and think about something bigger than results, it makes things a lot easier. It takes away the external pressures.

“You look at how teams will be viewing us at the moment,” said Stokes, whose side return to Test action against South Africa in August. “That third innings has become a fourth innings because they’re going to have to concentrate on how we’re going to play.

“To be in a position like that as a team, of being feared before they’ve even finished their innings, is an unbelievable place to be in. Teams don’t know how to play the third innings, especially when they’ve got a lead.

“A target of 380 six weeks ago would have been a scary thing for us to look at but we are always going to try and win a game. If we had needed 200 off 30 overs, we would have been trying do it, even if we had lost doing it. There is bit of me that almost wanted India to get 450 to see what we did!”

Things will not always be this good for England. This is sport. Things will go awry at some stage. But McCullum and Stokes have made their players believe anything is possible, that nothing is off limits, when for much of the previous year or so defeats have looked inevitable. All hail ‘Bazball’.

Watch England’s white-ball team in action on Sky Sports Cricket on Thursday as they face India in the first T20 international at The Ageas Bowl. Coverage starts at 5.30pm with the first ball at 6pm.

Experts say it’s about how often you exercise, not how much

‘A great gift to play the best’ – Raducanu relishing Serena...