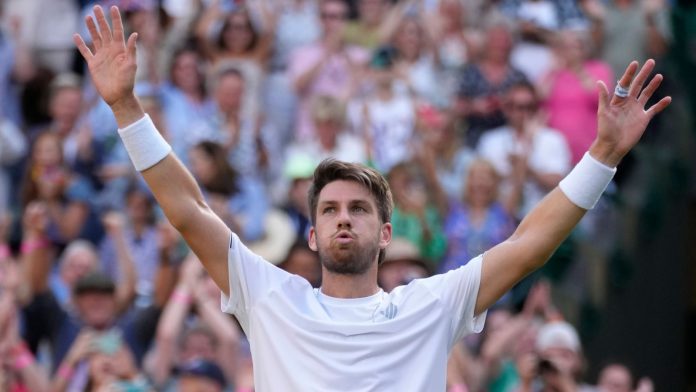 Cameron Norrie faces Novak Djokovic in the semi-finals at Wimbledon on Friday after coming through five sets to beat David Goffin in the quarters and log his best ever Grand Slam performance.

Stir in some added juice to a refined and weaponised forehand and you are left with one of the circuit’s most improved players across the last year and a half, culminating in a career landmark as just the fourth British man in the Open era to reach the Wimbledon semi-finals.

Norrie overcame an early stumble on Tuesday to out-work and out-stroke his way through a 3-6 7-5 2-6 6-3 7-5 victory over David Goffin and pencil in a final-four showdown with Novak Djokovic, who had fought back from two sets down to defeat Casper Ruud earlier in the day.

It marks a career-best Grand Slam performance, and a feat that has been brewing for British tennis’ unassuming star.

Norrie has been cycling to and from the Championships such is the relatively short distance between his house and the All England Club, citing the extra warm-up it offers and the added bonus of skipping the traffic.

In graciously declining the comfort of pre-arranged transport, he welcomes the normality and the independence he had sought and blossomed within while coming through the US college system as a student-athlete. The normality that has worked for him.

He is low-key and delicately spoken, but that is his thing now, not to mention why he is so easy to root for.

Though on this occasion Centre Court applauded a different and understandably-emotional Norrie as victory over Goffin reminded him of the journey to get here.

“Just all the hard work and the sacrifices and everything just kind of all hit me at once,” said Norrie. “Especially the situation, you know, here at Wimbledon in front of my family, my friends, and obviously a lot of people following that match.

“For me, just kind of thinking back, all the hard work, the sacrifices and everything, I kind of didn’t really know what to say. Got emotional there, and, just a crazy day and crazy match to get through, especially with the way that it started. That’s the reason why you play the sport.”

Norrie, who was born in South Africa to a Scottish father and Welsh mother before growing up in New Zealand, admitted his relationship with tennis had been rocky upon moving to London aged 16 when he decided to pledge his allegiance to Britain.

School life was different, his routine had changed drastically, but New Zealand could not offer him the same opportunities that Britain could. Almost a decade later, his relationship with tennis is as strong as it has ever been.
After a year in London Norrie committed to TCU (Texas Christian University) in the US and embraced an environment in which he could mature as a man as much as the NCAA resources that enabled him to enhance his game.

By the time he elected to turn professional in 2018 Norrie was the leading college player in the nation, with his success and popularity amplified over the past fortnight by an outburst of support from TCU Horned Frogs on social media.

Norrie cracked the top 100 in his first year as a pro and eased his way into recognition with a Wimbledon debut ending in a first-round loss to Jo-Wilfried Tsonga, a maiden Challenger Title and a place in the second round of the US Open, lifting the curtain on an unorthodox forehand wind-up perhaps reflecting the back-lift of a talented cricket player growing up.

A highlight in 2018 saw him overturn a two-set deficit to beat world number 23 Roberto Bautista-Agut on his Davis Cup debut, before reaching his first ATP final at the Auckland Open and breaking into the top 50 the following year.

The real emergence came last year, though, when Norrie closed out 2021 having won two of six final appearances, Indian Wells being among the triumphs, while reeling off 52 singles victories on tour to rise from 74th to 12th in the rankings.

Norrie translated that form into 2022 by defeating Reilly Opelka in the final of the Delray Beach Open to clinch his third career singles title, before reaching the final in Acapulco where he lost to Rafael Nadal having beaten Stefanos Tsitsipas. He then broke into the top 10 after making it to the fourth round of the Miami Open, and followed up by claiming a fourth title in Lyon thanks to a straight-sets win over Francisco Cerúndolo.

For a period between 2018 and 2020 observers questioned where Norrie’s greatest strength lied; the forehand had potential, the backhand struggled to enamour, his court and rally IQ was promising, his net game was steady enough and his coverage was faultless.

The offering today is a polished, self-assured package capable of troubling most, and a work ethic to rival the best.

On Friday he faces one of the best, if not the very best.

“I think it’s obviously one of the toughest tasks in tennis,” Norrie said of Djokovic. “I’d say grass is his favourite surface and his record is unbelievable here at Wimbledon. It’s going to be tough.

“Looking forward to taking it to him and seeing the level he brings. I didn’t really watch too much from him today, but he’s obviously feeling pretty good after coming back from two sets to love. Yeah, it’s going to be a tricky one.”

An inviting Wimbledon draw was a test in itself of Norrie’s ignorance to complacency; awaiting him in the semi-finals is a slightly contrasting challenge to play the match, not the occasion and not the reputation against a player in Djokovic who lures opponents into believing they must do more.

The other men’s semi-final will be decided on Wednesday as the USA’s Taylor Fritz takes on second seed Rafael Nadal, while Nick Kyrgios faces Christian Garin.

In the women’s draw, Simona Halep meets Amanda Anisimova and Ajla Tomljanovic faces Elena Rybakina in the quarter-finals, with third seed Ons Jabeur and Tatjana Maria set to contest the other semi-final.

Forest hold on for historic win over West Ham

Forest hold on for historic win over West Ham