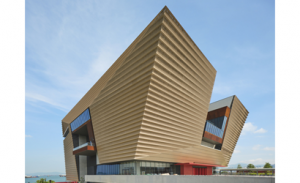 After five years in the making, the prestigious Hong Kong Palace Museum (HKPM) opened on Sunday July 3, 2022 as the latest addition to Hong Kong’s arts and cultural offerings and the West Kowloon Cultural District.

Joining a host of other landmark attractions on the storied Victoria Harbour waterfront, such as the newly opened M+ Museum and recently renovated Hong Kong Museum of Art, the HKPM elevates the city’s lineup of renowned museums and enriches its diversity of the arts and culture scene.

What’s more, the much-loved “A Symphony of Lights” will bathe Victoria Harbour alongside the HKPM in lights, music and colors with an enchanting special edition program every night in July. Beginning at 8pm every night, the captivating spectacle will feature new elements including a fleet of six Star Ferries adorned with glittering light installations, and expand to include new landmarks, such as the HKPM and M+.

Dane Cheng, Executive Director of the Hong Kong Tourism Board, said, “We are delighted to welcome the Hong Kong Palace Museum to Hong Kong’s artistic and cultural landscape and the West Kowloon Cultural District. Exciting, dynamic and constantly evolving, the district is brimming with activities and discoveries that underscore Hong Kong’s reputation as a leading destination for arts and culture lovers. We believe this world-class museum will generate even more interest for Hong Kong as an arts and cultural destination and solidify the city’s position as a center for international cultural exchange.”

The HKPM is a must-visit attraction for arts and culture lovers, and a treasure trove of rare artifacts. It houses one of the world’s most impressive collections of Chinese ceramics and more than 900 works of art on loan from the esteemed Palace Museum in Beijing – among the largest and finest lend the Palace Museum has ever made to another cultural institution outside the Mainland since its establishment. The HKPM also displays 13 precious pieces borrowed from the Louvre as a testament to the museum’s role as an East-meets-West Centre for International Cultural Exchange.