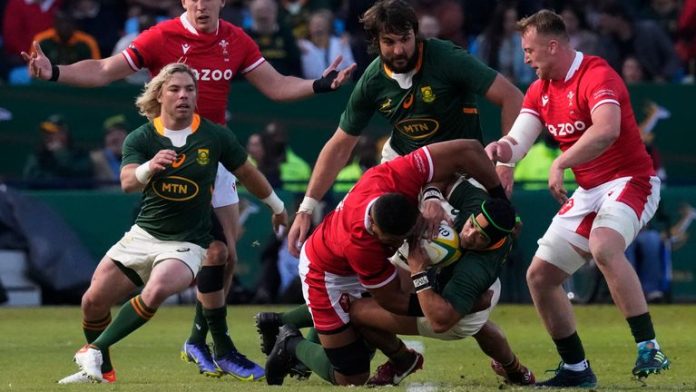 Wales head coach Wayne Pivac makes one change to his starting XV as his side look to respond to last week’s last-gasp 32-29 defeat to South Africa; watch the second Test between Wales and Springboks live on Sky Sports Action from 3.30pm on Saturday (4.05pm kick-off)

Wales have made one change to the side to face South Africa in their second Test on Saturday, live on Sky Sports, with Alex Cuthbert coming onto the left wing.

Cuthbert starts in place of Josh Adams, who moves down to the bench as Owen Watkin drops out of the squad, while Alun Wyn Jones is named on the bench again.

Also among the replacements, Saracens tighthead prop Sam Wainwright – in for injured Tomas Francis, whose tour is over due to concussion – is on the bench and set to make his Test debut.

Elsewhere, Wales are as they were from last week, when they very nearly pulled off a major upset against South Africa at Loftus Versfeld, leading 18-3 at half-time, and levelling the game at 29-29 late on despite only having 13 men.

Dan Biggar captains the side again from fly-half, with the impressive Kieran Hardy remaining at scrum-half ahead of Tomos Williams – who is on the bench.

In the back row, Dan Lydiate starts again at blindside flanker, Tommy Reffell at openside a week on from his Test debut, and Taulupe Faletau at No 8.

In prop Wyn Jones, second row Jones, back-row Josh Navidi, and wing Josh Adams, Wales have four British and Irish Lions to call upon in reserve on the bench.

Maori All Blacks vs Ireland – live on Sky Sports Action from 8am (kick off is at 8.05am)