Home Culture Trump’s latest fight with the Squad is in a song on ‘The... 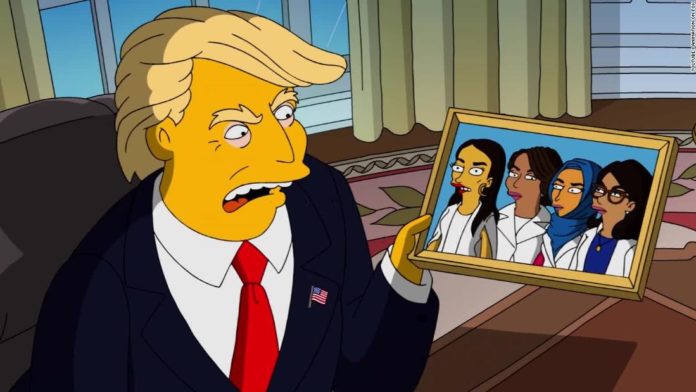 In a clip titled the “West Wing Story” posted on the show’s social media account this week, the President starts by complaining about his many problems and the need for a distraction. Then he grabs a group photo of Democratic congresswomen Alexandria Ocasio-Cortez, Ayanna Pressley, Ilhan Omar and Rashida Tlaib — and breaks into song.
“They shouldn’t be in America
No one but me in America
No taxes for me in America
This is my natural hair-ica,” Trump sings.

The lawmakers fire back

The women referred to as the Squad then step out of the photo and chase him through the White House as they sing along.
“We are more American than your wife
… You’re Boris Johnson without the class
Can’t wait to see you behind prison glass
Your nose is right up Putin’s a**
We say it’s time to impeach you fast,” they croon.
The lawmakers eventually chase Trump outdoors, where the 2020 Democratic candidates are dancing. He joins in and tries to keep up with them.
“Can’t be the first one to lose my breath,” a panting Trump sings before tumbling down on the grass.
A grinning Joe Biden peers at Trump. “Who’s an old man now?” he asks.
The show has been making fun of Trump long before he became President. In an episode in 2000, it predicted a Donald Trump presidency — and the outlook was not bright. After the 2016 election, the show responded to Trump’s victory with three words: “Being right sucks.”