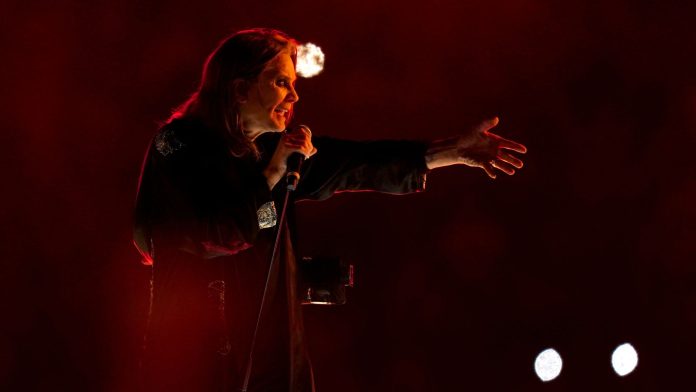 Rock legend Ozzy Osbourne made a surprise appearance onstage in his home city of Birmingham to close out the 2022 Commonwealth Games – just weeks after undergoing “life-altering” surgery.

The Aston-born musician, 73, was joined by members of his band Black Sabbath for the firework-fuelled performance of their hit song Paranoid.

Wrapping up the short performance, he added: “Thank you, good night, you are the best, God bless you all – Birmingham forever.”

Osbourne was diagnosed with Parkinson’s disease in 2019.

And in June he was discharged from a Los Angeles hospital after undergoing what his wife Sharon called “a major operation” that would “determine the rest of his life”.

The rocker has also been dealing with the impact of a 2003 quad biking accident.

Earlier in the ceremony, notorious fictional crime gang the Peaky Blinders took centre stage as part of a celebration of the musical heritage of the West Midlands.

The international competition came to an end on Monday night after 11 days of sporting action.

The ceremony, held at the Alexander Stadium in Birmingham, saw performances from artists including UB40, Beverley Knight, Dexys Midnight Runners, Goldie, The Selecter and Jorja Smith.

2022 has seen the most successful Commonwealth Games ever for the home nations, with a combined total of 275 medals, including 85 golds.

England led the way with 57 golds, behind only Australia in the medal table, and 176 in total, while Northern Ireland set national records and Scotland and Wales also thrived.

The Duke of Wessex officially closed the ceremony, saying: “Every four years, we endeavour to come together to celebrate our Commonwealth through sport.

“Thanks to the manner, style and enthusiasm with which you have competed, officiated, supported, organised and volunteered, you have, once again, brought the spirit and values of the Commonwealth to life.

“You have inspired us and hopefully future generations. You have also demonstrated what unites us. Thank you, Birmingham.”

Grammy Awards: Five things to look out for on music’s biggest night