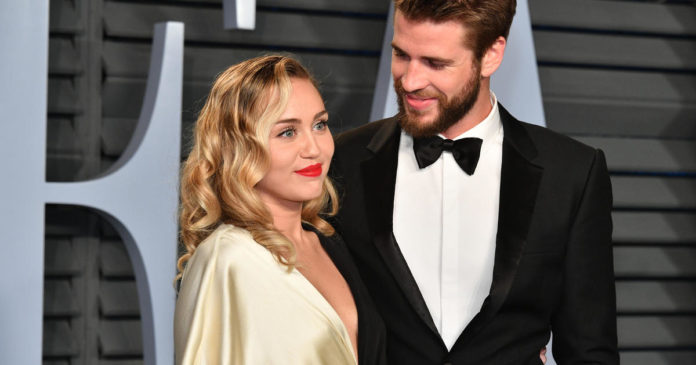 Soon after Miley Cyrus and Liam Hemsworth announced their split earlier this month, rumors of infidelity by the “Jolene” singer began to bubble up. On Thursday the songstress tried to put the whispers to rest — with a powerful Twitter thread about growing up in the spotlight and her controversial past.

“I can accept that the life I’ve chosen means I must live completely open and transparent with my fans who I love, and the public, 100% of the time,” she tweeted Thursday afternoon. “What I cannot accept is being told I’m lying to cover up a crime I haven’t committed. I have nothing to hide.”

She went on to detail her youth — which was often heavily documented and criticized in the press.

“It is no secret that I was into partying in my teens and early 20’s,” she said. Cyrus admitted that she “cheated in relationships” when she was younger and even referenced the famous music video for her hit “Wrecking Ball,” in which she swung on the device naked. She said there are “probably more nudes of me on the internet than maybe any woman in history.”

But despite her wild past, she said, she was all in with Hemsworth. “But the truth is, once Liam & I reconciled,I meant it, & I was committed. There are NO secrets to uncover here,” she said. “I’ve grown up in front of you, but the bottom line is, I HAVE GROWN UP.”

She went on to deny the rumors of cheating, adding, “I’ve said it before & it remains true, I love Liam and always will.” Cyrus explained that she simply had to make the “healthy decision” to “leave a previous life behind.”

“You can say I am a twerking, pot smoking , foul mouthed hillbilly but I am not a liar,” the singer stated. “I am proud to say, I am simply in a different place from where I was when I was a younger.”

Cyrus and Hemsworth got married in December and have been in an on-and-off again relationship for more than a decade. Both starred in the 2010 romantic drama “The Last Song.”

In addition to her relationship, the star detailed how the growing pains and experimental times in her life impacted her very public career. “I lost a massive Walmart deal at 17 for ripping a bong,” she claimed.

In 2009, the star had launched a Miley Cyrus & Max Azria clothing line with Walmart, timed to get a publicity bump before a concert tour. The retailer sponsored the tour. The duo released a second collection for the chain in 2010, reported People. In late 2010, celebrity gossip outlet TMZ released a video of Cyrus purportedly smoking a bong a few days after her 18th birthday.

However, the tweet isn’t the first time Cyrus has stated that smoking cost her the Walmart partnership. In 2016, she said so in Variety.

“I had a clothing line at Walmart and got kicked out, because they said you had to choose weed or Walmart,” Cyrus said. “And you see what I did — I chose weed.”

The singer also claimed her behavior impacted her movie career. “I got kicked off hotel Transylvania for buying Liam a penis cake for his birthday and licking it,” she wrote in the tweet.

In 2011, Entertainment Weekly reported Cyrus was cast as the teenage vampire Mavis in “Hotel Transylvania.” However, she didn’t end up voicing the character in the film. In 2012, it was announced Cyrus would no longer star in the movie, but her rep and one from the studio wouldn’t provide a reason. Selena Gomez was swiftly cast in the role.

Sony Pictures and Walmart have not responded to CBS News’ request for comment on Cyrus’ latest claims.