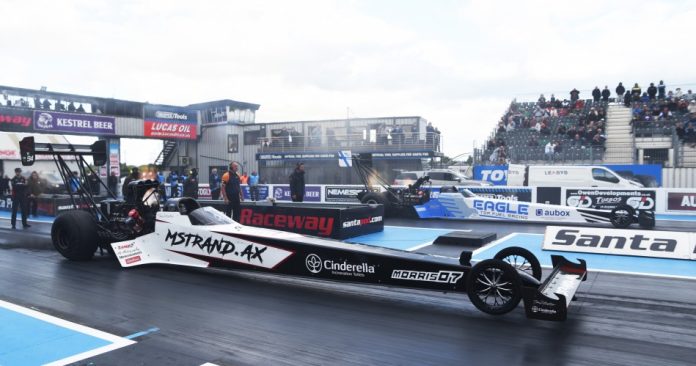 After a thrilling first round at Santa Pod Raceway in May, the FIA European Drag Racing Championship (EDRC) heads next to Sweden and Tierp Arena for the Scandinavian Internationals, from the 11th to 14th of August.

Triumphant in England last May and leaders in their respective categories, Antti Horto (Top Fuel), Sandro Bellio (Top Methanol) and Jan Ericsson (Pro Modified), will face many competitive opponents on the Swedish dragstrip.

In the premier class of the championship, Finland’s Antti Horto leads the competition after defeating the outstanding rookie Ida Zetterström in the final at Santa Pod. At Tierp Arena, Zetterström will look to grab both an EDRC record and her first race win. Meanwhile, Susanne Callin will be more determined than ever as she will be racing on her home soil.

The reigning FIA European champion Sandro Bellio won comfortably against Linn Fløysvik as the Ford Mustang driver had to withdraw from the final due to several mechanical issues. Bellio will be looking for another race win to make it two from two, while Fløysvik will be hoping for a trouble-free weekend.

Other strong competitors will be racing during the event, as Magnus Larsson will make his FIA EDRC debut in a Chevrolet Monte Carlo. Elsewhere, 2016 FIA EDRC Top Methanol Dragster Champion, Jonny Lagg will be one of the dragster drivers during the event and will be joined by Daniel Jedborn and Tony Bryntesson.

With 20 entrants from six countries, the Pro Modified field will be more competitive than ever.

At Santa Pod, reigning champion Jan Ericsson claimed victory by beating David Vegter, while also setting a new FIA EDRC Pro Modified ET record of 5.724 seconds. The Swede proved to be extremely quick and consistent and he will want to win in front of his home crowd this time out. Semi-finalists in Santa Pod, Switzerland’s Bruno Bader and Estonia’s Andres Arnover, who impressed with his turbo Mustang, will try to make it one step further and reach the final in Sweden.

Popular local drivers, multiple champion Michael Gullqvist and Mats Eriksson, driver of the famous Green Goblin Ford Crown Victoria, will be competing on their home soil, while Jere Rantaniemi will also be present with his turbo Camaro.

The Pro Stock category will kick off its season in Sweden as a mixture of new names and seasoned campaigners will be competing. Multiple champion Jimmy Ålund remains the favorite, though he will face strong competitors, including Stefan Ernryd (Dodge), Robin Norén (Pontiac GXP), and Finland’s Richard Sundblom.

Previously unseen in any FIA EDRC Pro Stock race so far, Sampsa Palos and Mika Knuuttila will be present on the drag strip of Tierp Arena.