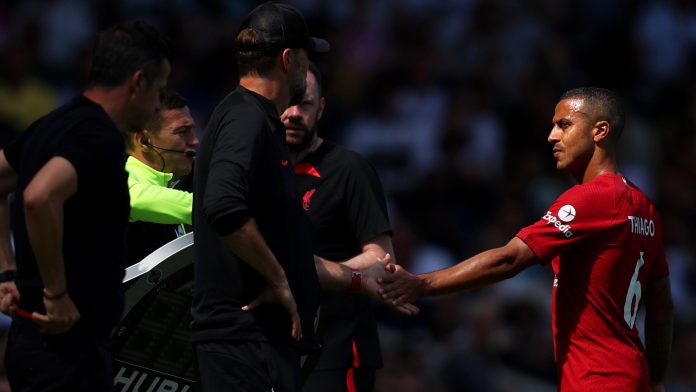 Liverpool midfielder Thiago Alcantara has been ruled out for a number of weeks after picking up a hamstring injury in Saturday’s 2-2 draw with Fulham.

The Spanish midfielder limped out of the Reds’ season-opener at Craven Cottage and Liverpool now do not expect him to play for them again in August.

The 31-year-old will, however, have another scan later this week as his rehabilitation from the injury continues.

Liverpool were without fellow midfielders Naby Keita, Curtis Jones and Alex Oxlade-Chamberlain on Saturday due to injury and illness.

But Jurgen Klopp has remained adamant that Liverpool’s transfer business is over and will not bring in any more midfielders, irrespective of their growing injury list.

“We said we don’t need a midfielder because we have enough – and we actually have enough, but the problem now is we get punished for something that is not our responsibility really because things like this can happen,” said Klopp after the Fulham draw.

“Nobody could imagine that Curtis gets the thing he gets; it is nothing serious but he is a young boy and it is a kind of stress reaction. Bodies are like this. Naby is only ill and he will now be back definitely next week again. Oxlade happened early and now with Thiago that is, of course, not good and we will see.

“Look, a transfer must make sense now and in the long term; we have midfielders, we have still enough midfielders. It is not that we lack midfielders, but it’s just some of them are injured.

“This is not a good situation, I don’t like it at all, but we have to see how we react on that – but for sure not panicking.”

Carra: No need for Liverpool to panic buy 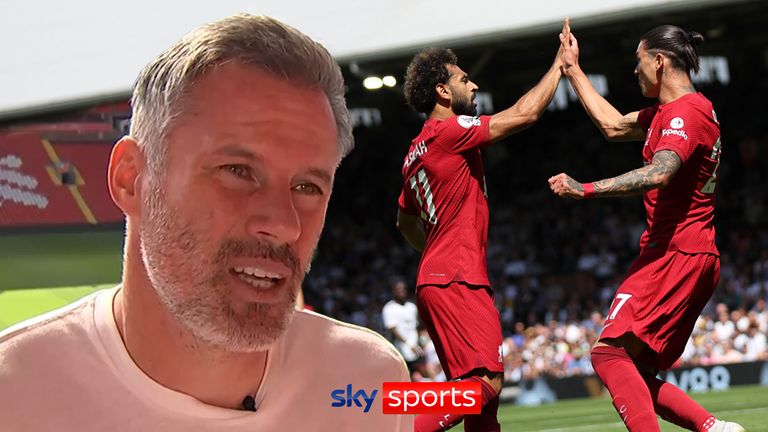 Jamie Carragher discusses Liverpool’s opening-day draw at Fulham, whether they need to venture into the transfer market again and where the other challengers for the Premier League title may come from

“Most people would say Liverpool’s midfield could now be strengthened, not in terms of numbers but maybe in terms of quality and offering something different to what they have in midfield. It’s not having a go at the midfield players that they currently have, it’s just the age profile of some of the midfielders there, who are getting into their 30s.

“Liverpool’s first-choice midfield – and the one that played at Fulham – is getting towards the 30-age mark. You think a younger and more energetic player at some stage is needed, they’ve got those players there in reserve but they’re all injured.

“I would only want Jurgen Klopp and Liverpool to do that if they get the midfielder they want. Liverpool’s success in the transfer market has been down to not panicking, it’s not what they’ve done in the past, it’s not what they’re doing now and it can’t be what they do in the future. If there’s no midfielder they want out there, don’t get him. But if they feel there’s one who has those quality and is available, I would like them to do it of course. But don’t panic.

“That’s the way Liverpool assess things in the transfer market. If you think about the deal with Virgil van Dijk, that deal fell through in the summer and they waited until January. They didn’t get another centre-back – and they did need one – but they waited for the guy that they wanted. That proved very successful and that’s what they’ll do in midfield.”