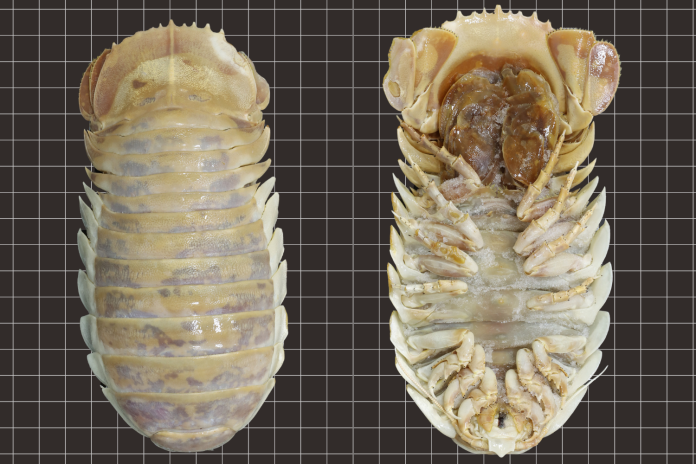 Deep-sea species tend to outgrow their shallow-sea counterparts. Whatever the cause of their increased size, whether the colder temperatures, the reduced pressures of predation or the increased scarcity of food in the ocean depths, animals such as crustaceans and cephalopods simply become bigger the deeper that they swim.

This tendency toward gigantism is no different for isopods. A new study in the Journal of Natural History identifies a new species in a group of giant isopods known as Bathynomus. This species, which the study authors named Bathynomus yucatanensis, is distinctive, despite its similarities to other deep-sea isopods. It suggests that scientists should take a closer look at the giants scuttering across the sea floor.

All told, there are almost 20 separate species of Bathynomus, a genus of giant segmented creatures that scurry and swim through the deepest areas of the ocean.

Now, the discovery of B. yucatanensis towards the Yucatán Peninsula adds to the catalog of giant isopods and means that a grand total of three separate Bathynomus species live in the Gulf of Mexico. This includes the similar-sized and similar-looking B. giganteus and B. maxeyorum, in addition to B. yucatanensis.

The study suggests that scientists should investigate deep-sea isopods with added care. “It is increasingly evident that species of Bathynomus may be exceedingly similar in overall appearance, and also that there is a long history of misidentification of species in the genus,” say the study authors in a press release.

Ultimately, the identification of this new species could impact the conservation of Bathynomus. The growing commercial potential of several isopod species make it necessary for scientists to know which species are caught and when.

The authors’ specimen of B. yucatanensis, which was found near the Yucatán Peninsula at a depth of around 2,000 to 2,600 feet and was initially identified as a varietal of B. giganteus. Yet, additional study of the specimen unveiled a number of unique attributes, such as the specimen’s creamy yellow coloration and distinctive body structure.

“[B. giganteus] was discovered over a century ago, and more than 1,000 specimens have been studied with no suggestion until now of a second species with the same number of pleotelsonic spines,” say the study authors in a press release. “Superficial examination, using only pleotelson spines, could easily result in specimens of B. yucatanensis being misidentified as B. giganteus.”

All in all, genetic analysis of B. giganteus and B. yucatanensis solidified the scientists’ identification. Though they revealed that two species are closely related and potentially share a common ancestor, the two species were different enough to count as distinct species.

“Due to the different sequences of […] genes […] coupled with differences in morphology, we identified it as a new species,” the authors conclude in a press release.