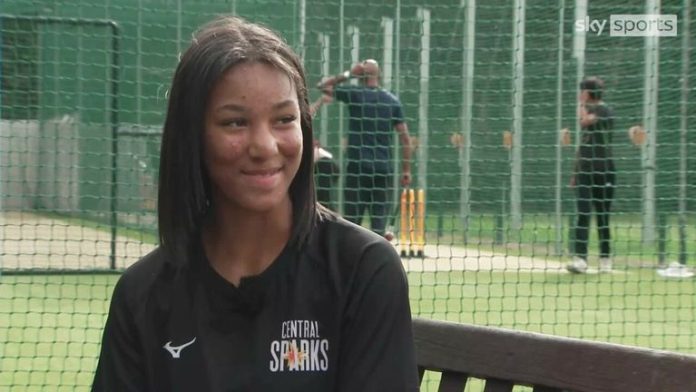 Davina Perrin, 15, is set to become the youngest player in The Hundred; Birmingham Phoenix begin their campaign with a game vs Welsh Fire on Saturday; the women’s Hundred starts on Thursday with defending champions Oval Invincibles taking on Northern Superchargers on Sky Sports from 6pm

Fifteen-year-old Davina Perrin is desperate to “show what she can do” if she gets the chance to represent Birmingham Phoenix in this summer’s Hundred.

Perrin has been added to a squad which includes the likes of Australian great Ellyse Perry and England pair Amy Jones and Issy Wong and would become the competition’s youngest-ever player if she is selected in the coming weeks – a call up which she described as “surreal” and “left her speechless”.

Perrin has featured for the Central Sparks in the Rachel Heyhoe-Flint Trophy and the Charlotte Edwards Cup in recent months and is now aiming to continue her progression at an even higher level.

Phoenix begin their campaign with a game against Welsh Fire on Saturday and Perrin is hoping to be involved at some point having been captivated by the competition in 2021.

“I think particularly as a young girl who was aspiring to progress with my cricket it was amazing just to see people going to see the women’s game and watching other women within the sport just shine on that stage and prove us women can do what the men do,” Perrin told Sky Sports.

“I don’t like to put any pressure on myself when it comes to cricket so as far as I’m concerned if I can go out there and do my best the rest should come, but that’s all I’m really thinking about, have fun.

“I am cautious of the fact I am still quite young and that’s the main reason I plan to continue to play.

“I’d like to get a game, the chance to step out on to that pitch and prove what I can do, prove what I’m capable of.”

Perrin is one of the early successes of the ACE programme, spearheaded by former England player Ebony Rainford-Brent, launched in London but expanded across the country.

ACE is intended to develop and support diverse talent and increase the opportunities for young black cricketers, an area that has been neglected for too long.

As a young black player Perrin admits it has helped her feel more at ease within the sport.

“Honestly the ACE programme has been phenomenal, the support and mentoring I’ve got from the likes of Ebony and Chevy (Green) that’s been vital for me to progress and get to where I am at the moment,” she said.

“You can’t be what you can’t see and to be around other people who look like me, black people, I think that was vital to feel comfortable, and there are other people in my shoes in this cricketing environment I can relate to and who I can speak to about things I struggle to speak to others about.”

The Hundred has proved a superb springboard for talented teenagers like new England caps Alice Capsey and Freya Kemp already, now Perrin will hope she too can impress in the shortest form of the game in the weeks to come.

Watch every match from The Hundred this summer live on Sky Sports. The women’s competition starts on Thursday with defending champions Oval Invincibles taking on Northern Superchargers at The Kia Oval (6.30pm start).