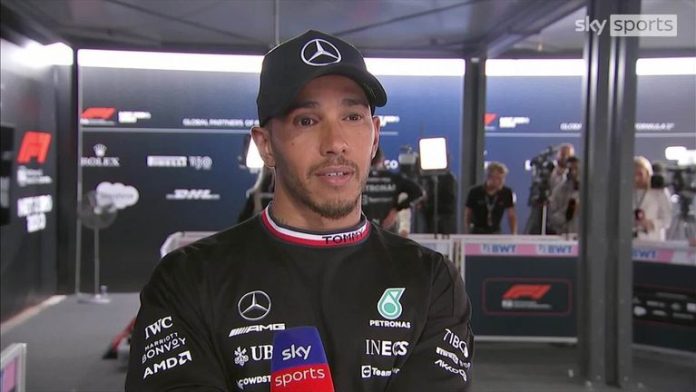 “We had some good battles, I wish we could have more and hopefully he’s going to continue to race so hopefully we will have more in the future.”; Since Lewis Hamilton’s comments, Fernando Alonso has agreed a shock multi-year deal with Aston Martin

Lewis Hamilton believes that “on pure pace” Fernando Alonso is the toughest rival he’s ever had in his Formula 1 career, while the Spaniard has described his former team-mate as a “legend”.

Hamilton and Alonso have enjoyed glittering careers with a combined nine titles and 135 wins from 650 starts, while their journeys also intertwined during an infamously combative year as McLaren team-mates in 2007.

Though that rivalry got so intense that Alonso would leave the team after one season, their respect for each other has grown with every passing year and Hamilton, 37, picked out Alonso, 41, as his most talented competitor.

“I remember the task of being alongside Fernando when I was 22,” recalled Hamilton ahead of his 300th race last month.

“I was so young mentally and of course, OK in terms of skill but it’s a lot of pressure to go against a great like him.

“So I would say out of pure pace I think… I always say [my toughest opponent] is Fernando and his ability.

“We had some good battles, I wish we could have more and hopefully he’s going to continue to race so hopefully we will have more in the future.”

Since Hamilton’s comments, Alonso has secured his F1 future for multiple more seasons with a surprise switch for 2023 from Alpine to Aston Martin.

Asked how Hamilton had evolved over the years, Alonso said he “hadn’t changed much” but that he had added experience to his talent – while also picking the right team in Mercedes – to become F1’s most successful star.

“He had the talent, already in 2007 and he still have the talent now with experience and he has been a tremendous driver, and a legend of our sport,” said Alonso.

“So it has been always a pleasure to share all this time with him and back then probably no one thought that someone will be able to win seven titles as Michael [Schumacher].

“But yeah, the journey has been amazing and the team that they all build at Mercedes over these years, he was outstanding.”

Alpine boss Otmar Szafnauer said a contractual dispute was the reason for Alonso’s shock move to Aston Martin for 2023.

Szafnauer said Alpine had offered Alonso a contract extension which would have guaranteed him a seat for the 2023 season with an option to extend for another year.

“We offered a one plus one deal. And we discussed with Fernando that: ‘Look, if next year at this time you’re performing at the same level, of course, we will take you and that could have carried on’,” he said.

Aston Martin are currently five places and 79 points worse off than Alpine in the F1 standings.