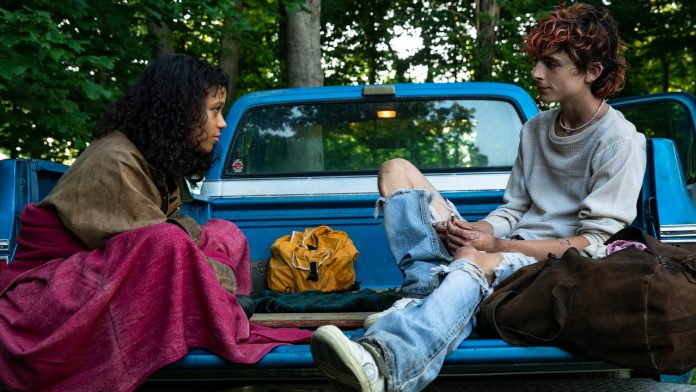 Call Me by Your Name director Luca Guadagnino is working with Timothée Chalamet on a new horror film called Bones and All. The director and actor have shared a short teaser ahead of the film’s release, which depicts Chalamet and co-star Taylor Russell in a tender moment before the clip cuts to shots of the pair on the run in the desert. Watch below.

Based on the Camille DeAngelis novel of the same name, the film tells the story of two teenage cannibals in 1980s America. As Guadagnino recently told Deadline:

There is something about the disenfranchised about people living on the margins of society that I am drawn toward and touched by. I love these characters. The heart of the movie is tender and affectionate towards them. I’m interested in their emotional journeys. I want to see where the possibilities lie for them, enmeshed within the impossibility they face. The movie is for me a meditation on who I am and how I can overcome what I feel, especially if it is something I cannot control in myself. And lastly, and most importantly, when will I be able to find myself in the gaze of the other?

Chalamet and Russell will be joined in Bones and All by Chloë Sevigny, Mark Rylance, André Holland, David Gordon-Green, Jessica Harper, Jake Horowitz, and Michael Stuhlbarg. The film was written by David Kajganich, who has previously worked with Guadagnino on the films Suspiria and A Bigger Splash, and will include a score composed by Trent Reznor and Atticus Ross.

Bones and All will premiere at the 79th Venice International Film Festival and receive widespread theatrical release in the United States starting November 23.

Read “Luca Guadagnino on the Music of His Movies, and Why He Had to Have Sufjan Stevens for Call Me by Your Name” over on the Pitch.

New Artist Spotlight: The Interesting Mélange of Styles and Philosophies that is jRadx [Video]