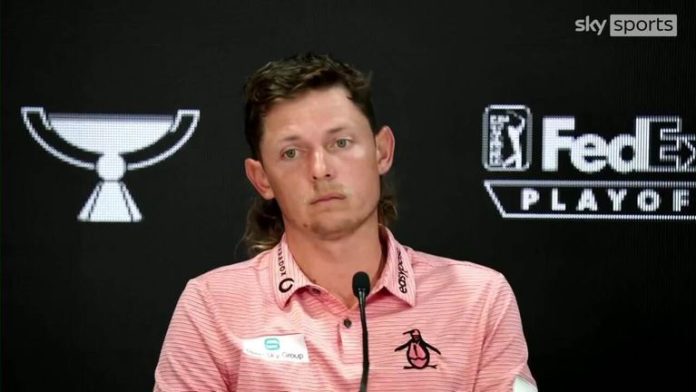 Australian golfers who sign up with the Saudi-backed LIV Series will still be welcome to play in home events, amid reports Cameron Smith has already agreed to join the breakaway circuit.

The Australian Open and Australian PGA Championship, two of the biggest tournaments on the PGA Tour of Australasia calendar, are co-sanctioned by the DP World Tour, which moved to block some players from its tournaments in June after they played a LIV event.

Australia, however, hopes its biggest names can return home to give the local tour a boost after two difficult years disrupted by COVID-19.

“The players coming home to play, as long as there is no conflicting event they will be welcome to play,” PGA of Australia CEO Gavin Kirkman told reporters.

“The Australian players that come home from wherever they’re playing at the moment, if they’re members of our organisation they’ll be eligible to play and that’s been discussed with the other tours.”

A number of low-profile Australian golfers have signed with LIV, including world No 82 Matt Jones.

Australian Travis Smyth, ranked outside the top 400, shared in a $1.5 million prize with three players for finishing second in the team element at the LIV opener outside London in June.

The Telegraph newspaper reported Australia’s top player Smith, the world No 2, has signed a $100 million-plus deal to join LIV in a major coup for the breakaway series.

LIV and Smith, who is competing at the FedEx St Jude Championship in Memphis, have declined to comment on the report.

Smith said after winning The Open he was keen to return home to Australia for a couple of events.

LIV has said it will expand to Australia next year and local golf media reported the series, spearheaded by CEO Greg Norman, could have three events in the country in 2023.

That could bring plenty of big-name players to Australia, which has often struggled to lure them to events due to the distance and relatively modest prize money on offer.

Kirkman said his tour could not control how LIV operated in the country and that it needed to look after its own business.

“Some people are going to love it and some people aren’t, but if it comes to Australia we’ve got to be in a position where we stay focused on our strategy,” he said.

“If (fans) get out and see some golf under a different format, that’s up to them.”

LIV trio ‘failed to show they have been harmed’, says ruling Judge

Three LIV players seeking to play in the FedEx Cup play-offs failed to show “they have been harmed – let alone irreparably”, the ruling judge has said.

Judge Beth Labson Freeman on Tuesday said Talor Gooch, Hudson Swafford and Matt Jones were “well aware of the consequences” of their actions in competing in LIV events without permission and had not “made their case” against being suspended by the PGA Tour as a result.

The decision meant the trio were not added to the field for the FedEx St Jude Championship, the first of three play-off events which began at TPC Southwind in Memphis on Thursday, the same day the judge’s written ruling was released.

“Based on this evidence, Plaintiffs have not even shown that they have been harmed – let alone irreparably,” Freeman wrote.

“It is clear that the LIV Golf contracts negotiated by the Plaintiffs and consummated between the parties were based on the players’ calculation of what they would be leaving behind and the amount of money they would need to compensate for those losses.

“Plaintiffs have signed contracts that richly reward them for their talent and compensate for lost opportunity through TOUR play. In fact, the evidence shows almost without a doubt that they will be earning significantly more money with LIV Golf than they could reasonably have expected to make through TOUR play over the same time period.”

Judge Freeman disagreed with the LIV players’ legal argument that not appearing in the play-offs would cause them to suffer financial and reputational losses.

She wrote: “Plaintiffs’ contention that they will irreparably lose future sponsorship opportunities and career status is undermined by Plaintiffs’ evidence that LIV Golf offers a refreshing new ‘extremely fan-friendly’ business model that will lead to ‘an improved broadcast output and entertainment experience’ compared to the staid old golf world built by PGA TOUR.

“If LIV Golf is elite golf’s future, what do Plaintiffs care about the dust-collecting trophies of a bygone era?”

It comes after Rory McIlroy welcomed the judge’s “common sense” decision to rule against the trio.

Speaking at a pre-tournament press conference, McIlroy said: “From my vantage point, common sense prevailed and I thought it was the right decision.

“It just lets us focus on the important stuff, which is the golf. We can all move forward and not have that sideshow going on for the next few weeks, which is nice.”