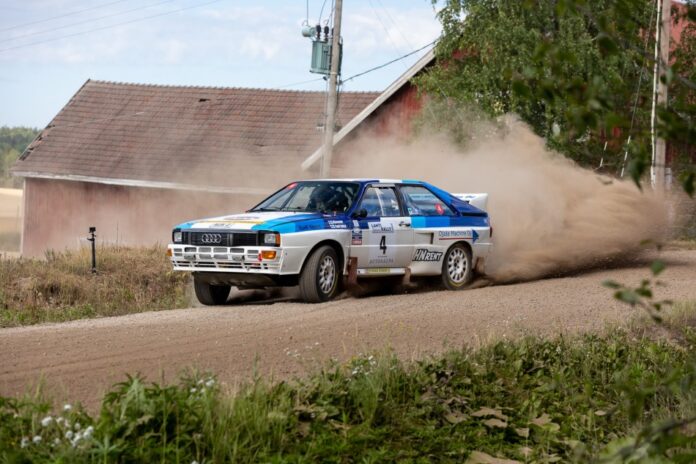 The first day of the 2022 Lahti Historic Rally, which is the host event for Round 6 of the FIA European Historic Rally Championship, saw Kari Kivenne and Asko Sairanen finish in second overall and the leading FIA EHRC eligible entry.  They finished the sixth stage 54.7s ahead of championship leaders Ville Silvasti and Risto Pietilainen.

The no16 Latvala Motorsport Toyota Celica of 2014/15 Rally Finland winner and WRC front runner Jari-Matti Latvala and his co-driver Juho Hanninen was the runaway leader at the end of the first day, the Finns 1m38.2 ahead of the no4 Audi quattro of Kivenne and Sairanen.  However, Latvala and Hanninen are not full season EHRC entrants and therefore are not eligible for championship points at the end of the Lahti Historic Rally.

The no6 Ford Sierra RS Cosworth 4×4 of Anders and Ingrid Johnsen finished the day in third spot on the EHRC listings.

The no2 Porsche 911 SC of Karl Wagner and Gerda Zauner arrived at the final service in the Category 3 lead but there was a lot of concerned looks in the service park as the Austrian team tried to find a solution to a transmission issue.  The Porsche had arrived at the service area stuck in third gear and, unfortunately, there was no solution to the issue.  The car retired, handing the overnight Category 3 lead to the Volvo 244 of Siegfried and Renate Mayr.

The Category 2 battle between the no5 Ford Escort of Valter Jensen and Erik Pedersen and the no10 Ford Escort of Will Graham and Michael Johnston was close on every stage.  At the end of the sixth and final stage of the day, the gap between the two cars was just 0.8 seconds, with the Norwegians ahead of the British crew.

In Category 1 the current championship leaders Ernie and Karen Graham were revelling the road conditions, which they described as perfect Escort roads.  The British crew finished the day over three minutes ahead of their rivals, with the no14 Alfa Romeo Giulietta of Teuvo Hamalainen and Pirjo Rosberg in second place.

The only other EHRC car to retire on the first day was the no8 Mercedes-Benz 190E of Tuomo Liukkonen with an engine issue.

Leg 2 of the Lahti Historic Rally will get underway at 09h09 with the first car on SS7.

Allen leads Bills to third-straight win over the Patriots

Josh Rock: I will do everything I can to become No 1 and world champion

SWISS offers its inflight guests gourmet dining from ‘After Seven’ in...