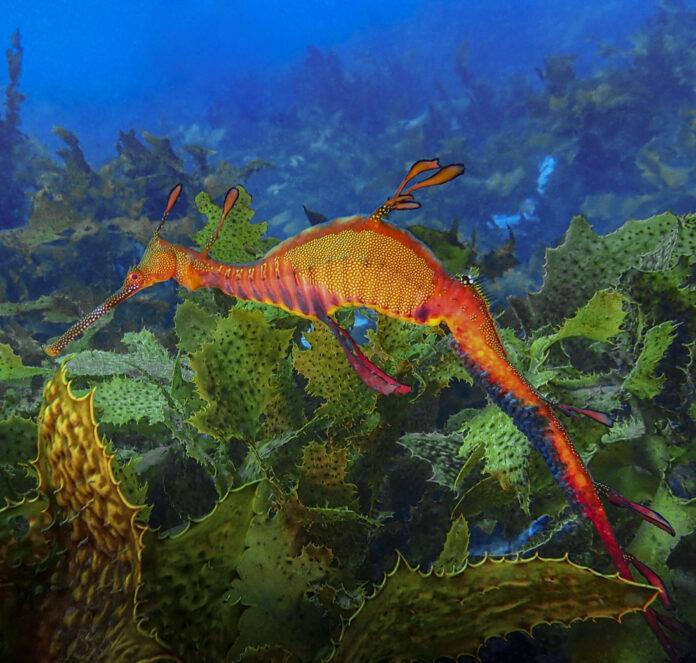 The Great Southern Reef (GSR) in Australia, is a series of temperate, rocky reefs and undulating kelp forests, covering about 5,000 miles (8000 kilometers) along the New South Wales and Queensland border.

The weedy seadragon (Phyllopteryx taeniolatus), calls the GSR home. It’s a creature from a fantasy novel, with orange and red color, and yellow and purple accents. It has kelp-like appendages and is peppered with dots and splotches unique to each one.

And earlier this year, the weedy seadragon was subject to a mass wash-up event, killing 200 on the shoreline. Citizen scientists worked alongside marine experts to solve the question of why it happened and how to stop it happening again.

They might not look like it, but weedy seadragons are fish. They’re related to seahorses and they share some common traits. They both use their tube-like snout to suck up tiny shrimps and zooplankton, and the male broods the eggs. However, unlike seahorses, seadragons don’t have a pouch.

Instead, the male fuses the fertilized eggs to the underside of his tail, protecting them until they hatch around two months later. The tail also differs from a seahorse as it’s not prehensile, so it cannot grip onto things. This could possibly make them more vulnerable to storm surges.

Professor David Booth, a marine ecologist from the University of Technology, Sydney, has been working with the species since 2001. A normal year “might see a dozen” strandings, but this April alone saw well over 150 weedy seadragons washed ashore from the Central Coast in New South Wales, down to the Illawarra.

A dangerous weather event brought wind, record-breaking rainfall, flooding and storm surges to the east coast of Australia from February to April in 2022. While much of the focus was on the loss of human life and property, as the weather subsided and people resumed their normal activities, another effect of the devastating storms came to light — the death of close to 200 weedy seadragons.

Reports first started to trickle in from divers, but after Booth made a plea for information and photos from the public, social media spread the word and concern. Emails from people finding deceased seadragons started to pour in.

While the weedy seadragon is not currently under threat of extinction, according to the IUCN Redlist, there’s evidence that numbers are declining. In Tasmania, there are a couple of sites where the populations have gone locally extinct. Population numbers in the areas affected by the recent wash-up are difficult to confirm, however Booth estimates that there are “probably a couple of thousand” seadragons.

Having citizen scientists send in clear images, and details of where they have found a stranded seadragon has been invaluable, and Booth says, “We’re realizing that people walking the beach are an amazing source of data.”

Many of those people walk the same stretch of beach over a period of years and are attuned to what is normal for the area, and for each season.

“There’s a woman named Margaret ‘Betty’ Ratcliffe, who has been walking the same Narrabeen beach for 30 or 40 years and she found seven down near her. So, she was able to say, ‘there has never, ever been anything like this before.’ You might say, ‘that’s not scientific,’ but it’s good enough for me,” says Booth.

There are also other citizen science-based projects currently collecting data on wild seadragon populations. The project Seadragon Search allows “anyone who visits the beach or swims in the sea” the opportunity to provide information and images on seadragons that they see while diving. This has enabled an extensive library to compile information on the seadragons and their unique markings.

And while research into the causes of the mass wash-up is ongoing, Booth says that it was “almost certainly caused by the horrible battering of the East Coast Lows.”

Their main food source, mysid shrimp, drastically dropped off in numbers, while the storm surged and strong currents pushed them up onto the shore. The images from the April wash-up and those taken of the bodies recently collected by Professor Booth and his team, will be uploaded to the Seadragon Search site. They’ll see if they can match with any of these previously identified seadragons to determine which locations were worst affected.

But it’s not just the scientists who benefit from citizen science data. In a world where the climate and the environment changes could feel overwhelming, something as simple as walking on the beach could help those creatures who live in it.