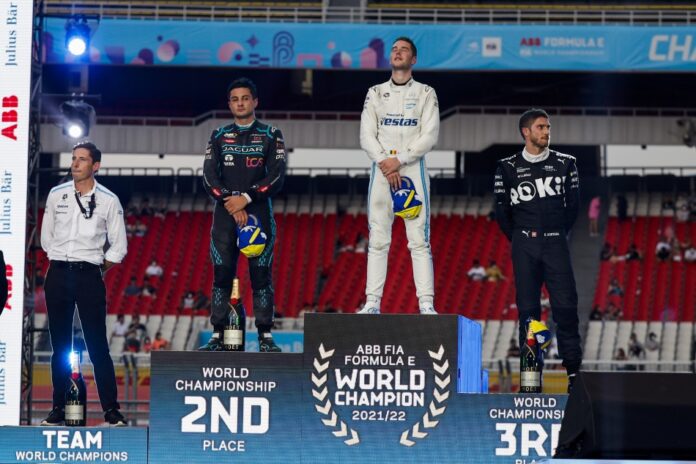 Edoardo Mortara ended the 2021-22 ABB FIA Formula E World Championship with a fourth win of the year, but even his dominant performance in the Seoul e-Prix — Formula E’s 100th outing — could not overshadow Stoffel Vandoorne’s return to the role of champion.

The Belgian, who won the 2014 GP2 Series before moving to F1, needed only to finish seventh in the 16th round of the year to ensure he took the crown, and was handed a massive boost to his ambitions when sole title rival Mitch Evans struggled through qualifying and lined up only 13th to Vandoorne’s fourth. While the Kiwi was able to make progress — albeit gradual — in the 45-minute plus one lap race, Vandoorne was able to keep a watching brief on the top three early on before capitalising on problems for polesitter Antonio Felix da Costa and fellow front row man Jake Dennis.

Neither was leading for more than a single lap, however, as Mortara (ROKiT Venturi) fairly vaulted from third place to take second off the line, and then executed a perfect dummy on da Costa to seize top spot at the start of lap two. From there, the Swiss driver was never headed, pulling away from Dennis — who took advantage of Mortara’s move to grab P2 — at a rate of several tenths of a second. da Costa, whose Techeetah squad still harboured dreams of second in the teams’ standings, tried in vain to repass Dennis (Avalanche Andretti), the pair eventually making slight contact on lap 19. The Portuguese ace’s evading action sent him tumbling down the order, although he eventually recovered to take tenth spot, combining with Jean-Eric Vergne’s sixth spot to cement third in the teams’ table.

Dennis was subsequently penalised for the incident with da Costa but overcame the five-second addition to his race time to complete the podium ahead of fourth-placed Robin Frijns (Envision). Oliver Askew’s climb to fifth on the road was enough for Avalanche Andretti to move into sixth overall at the expense of TAG Heuer Porsche, which failed to get either of its cars to the finish.

Behind Vergne, Evans came home a valiant seventh but, with his title hopes already ailing after qualifying, it was never going to be enough. The Kiwi’s four wins for Jaguar TCS Racing tied Mortara for the best of the year, but could not compete with Vandoorne’s metronomic consistency, which yielded just one win but a series’ record eight trips to the podium. Nick Cassidy backed up team-mate Frijns’ with eighth and fastest lap, confirming Envision Racing in the teams’ top five, with Sebastien Buemi (Nissan e.dams) and da Costa completing the scorers.

Vandoorne’s triumph ensured that Mercedes EQ bows out of Formula E with back-to-back championship doubles, following Nyck de Vries’ success in 2020-21, with Evans having enough in hand to remain ahead of Mortara in the top three overall. The Swiss driver will point to a late-season slump in form and fortune, prior to bouncing back in Seoul, for his inability to challenge for the title, but will head into the 2022-23 campaign — which brings a lot of change in both technology and driver/team pairings — on a high. Verge and Lucas di Grassi, the latter taking part in his 100th FE race, round out the top five in points.

“I’m speechless! This is amazing – what a season this has been. World champions… wow! It’s just the best feeling ever. Just look at the season we’ve had: the consistency, the car has been amazing, the team — every single one of us — deserves this as what we’ve accomplished is something special. Mitch [Evans] and Edo [Mortara] have pushed me all season long. They were there all the time, so it was all about the consistency in the end – they’ve both got more wins than me, but I’ve got more podiums! It was difficult to focus in the race, especially as the pace at the end was so high — I knew Jake [Dennis] had a five-second penalty, so I had to stay close enough to him to secure P2 — but it’s been an awesome day. I’m drained after this season to be honest, with all the effort and the effort the team put in, but it’s been incredible!”

“Today was extremely positive, although I still feel very frustrated because we were not able to score any points in the last two race weekends. I’m thankful to the team for giving me such a strong car this season, and to finish like this is really what I needed. We are normally better racers than we are qualifiers and I knew that, if I could manage to take the lead, we have been pretty good at managing the races. It’s a great day!”