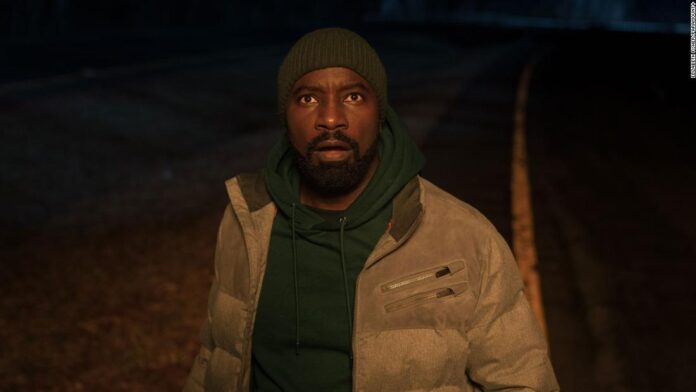 Scenes in movies and TV that once inspired terror — cackling demons possessing the body of a young girl, dark prophecies about the number 666, preachers warning terrified congregations about “the father of lies” — now seem passé.
“Lucifer” is now a debonair nightclub owner in a Netflix series.”The Exorcist” is the subject of countless spoofs. And few modern preachers devote weekly sermons to the machinations of His Satanic Majesty.
But one television show has found a way to make evil frightening again — and tap into many of the modern anxieties dividing contemporary America. The Paramount+ series, “Evil,” which wraps its third season on Sunday, is one of the creepiest shows to ever air on television. Yet it also offers what one Catholic writer calls “some of the most moving and thoughtful explorations of faith, good and evil” that TV has ever seen.
The stylish procedural, which has been described as “‘X-Files’ meets ‘The Exorcist,'” follows the adventures of David (Mike Colter), a Roman Catholic priest who teams up with Kristen (Katja Herbers), a skeptic-turned clinical psychologist, and Ben (Aasif Mandvi), a tech-savvy atheist, to investigate mysterious events on behalf of the Catholic Church. Their mission is to debunk or validate alleged miracles, demonic possessions and other unexplained phenomena.
The show has been a critical and commercial hit. It’s one of the most popular shows on Paramount+ and its third season has earned a 100% rating on Rotten Tomatoes. Everyone from Entertainment Weekly (“hellishly fun”) to Vanity Fair (“A necessary evil”) has praised the depth of its writing and acting, along with its absurdist humor. In one scene, for example, a succubus — a seductive demon in female form — pauses to remove her retainer before resuming assaulting a terrified victim.
“Evil,” though, is more than ghoulish entertainment. In three ways, it also offers an unlikely deliverance from some of the most frightening divisions splitting America.

It shows we don’t need to be possessed by politics

It’s one form of modern-day possession that you can’t summon a priest to battle.
A friend or relative goes down a political rabbit hole. They become consumed with political conspiracy theories. They obsessively watch cable news. You can’t talk about politics or religion with them anymore, because you don’t recognize the person you once knew.
When modern politics gets reduced to a battle between good and evil, it’s hard to find examples of people who aren’t divided by their differences.
Not so in “Evil.” The show’s three main characters are separated by race, culture and religious beliefs. And yet they deeply respect, listen to and support one another. They change each other’s minds. They make each other laugh. The warmth of their friendships is one of the pillars of the show.
In one pivotal scene in “Evil’s” third season, David, the Catholic priest, takes the skeptic psychologist Kristen aside to repair a rift.
“I know you don’t believe in God, but I do,” he tells her. “And that requires an action that is beyond what we have… when God demands something of me, I have to obey.”
“I wish I understood,” she says, near tears.
David assures her that she doesn’t have to understand or adopt his faith. What matters is that she knows how much he cares for her, despite their differences.
In today’s polarized cultural climate, that scene could qualify as a miracle.
In a sly way, the show offers an alternative model of how people in contemporary America can remain close even when they disagree.
“That was deliberate,” says Robert King, part of the husband-and-wife team that created and produces “Evil.” (Robert and his wife, Michelle King, also are the creators of two other acclaimed series: “The Good Wife” and “The Good Fight.”)
Michelle is the child of Holocaust survivors. She believes science and psychology offer answers to what some call evil.
Her husband has different beliefs.
“I come from a Catholic family,” says Robert King, who says he believes in personal evil and demons. “I do believe the world is under the umbrella of original sin.”
Their series is also a reflection of the couple’s relationship. Robert is a Roman Catholic and Michelle is a secular Jew. During their three decades of marriage, they have debated many of the issues that are explored in the show.
“We wanted to show that people can have different point of views about faith and could still have meaningful dialogue,” Robert King says.

In an era of absolutes, it embraces ambivalence

There was a time when the rise of the internet was greeted with optimism. Commercials rhapsodized about the “global village.” Advocates said it would bring the world closer. That belief now seems as outdated as the classic horror film, “The Creature from the Black Lagoon.”
There is a growing recognition that social media can erode people’s mental health and poses a threat to democracy. The rise of the internet has even solidified the rule of dictators through what some call “digital authoritarianism.”
Part of what makes “Evil” so effective is that it fuses traditional horror elements with the contemporary evils lurking online.
In one episode, a priest is thought to have been possessed. But the real culprit is an online gambling addiction.
In another, two young boys are terrorized by an entity that stalks them at night. But the evil source turns out to be someone who wants to raise their profile on a social platform that’s a thinly disguised version of TikTok.
The show takes on other modern horrors: gun violence, racism, and the fear — heightened by the overturning of Roe v. Wade — that women are no longer in control of their bodies.
It does this by tucking its messages into chilling and unpredictable storylines. It makes room for the existence of personal evil. The show also embraces ambivalence: Some seemingly supernatural events turn out to have rational explanations, while others are left open-ended.
This ambivalence is what impresses Deepak Sarma, a professor of Indian religions and philosophy at Case Western Reserve University.
He says the show reflects today’s political climate, in which people often disagree about basic facts. Some say the 2020 presidential election was stolen; others don’t. Some believe the fetus has a soul; others don’t. Some believe the news is fake; others don’t.
The show affirms both believers and non-believers, he says.
“It’s made ambivalence a mode of entertainment,” he says. “That’s the beauty of entertainment. It’s a wonderful way to interject these questions, and the (audience) can think about it independently at home.”

It depicts organized religion as a force for good, not just division

“Every hero becomes a bore at last.”
That quote from 19th-century philosopher Ralph Waldo Emerson reflects a truism about the horror genre: People are more fascinated by villains than heroes. Horror franchises, like the “Alien,” “Predator,” “Halloween” and Hannibal Lecter franchises, are built around villains. Many actors say they’d rather play villains than heroes.
Those trying to portray goodness in a show about faith also face another challenge: Growing distrust of organized religion. The clergy sex scandal in the Roman Catholic Church, the growth of White Christian nationalism and church schisms over such issues as racism and abortion have turned many Americans off from organized religion.
But “Evil” does something daring. It portrays institutional religion as a force for good. Its hero is a devout Catholic priest, and it mostly portrays members of the Catholic Church as good, well-intentioned people.
That portrayal is what drew Michael Foust, a freelance writer and Christian blogger, to become a fan of the series.
“The show is not simply about the supernatural — it presents hope,” Foust told CNN. “It shows that material things don’t satisfy. That’s why I think people in the world are so discouraged. It [the show] makes us think of things that do satisfy.”
One critic believes the show’s portrayal of David, could help boost the image of Catholic leaders.
“The portrayal of David is deeply engaging because he’s … a relatable man who is handsome, human, and quite possibly a character who will draw even non-believing viewers into respect for Catholic clergy at a time when it’s sorely needed,” Carl Kozlowski wrote in the Catholic World Report.
The series also makes goodness compelling through the character of Sister Andrea, a tiny, nondescript nun who is often seen carrying a broom. Yet she’s also the show’s spiritual powerhouse, a person whose incandescent faith makes demons shudder.
Sister Andrea could have been portrayed in a sanctimonious way, but she is one of the most funny and likeable characters on the show.
Michelle King credits the character’s charm to the actress who plays her, Andrea Martin.
“When you have a comic actress like Andrea Martin, I don’t think she could be boring if she tried,” King says.
Neither can “Evil,” at least so far. The show has been renewed for a fourth season.
It’s fitting that the show airs on Sunday nights. It offers something for those who believe humanity remains, as Robert King says, “under the umbrella of original sin.” It also offers something for those who are more concerned about the horrors of the contemporary world.
When a TV show can speak to so many people at such a divided time in our history and illustrate how we can disagree without becoming mortal enemies, that’s not evil. That’s good.