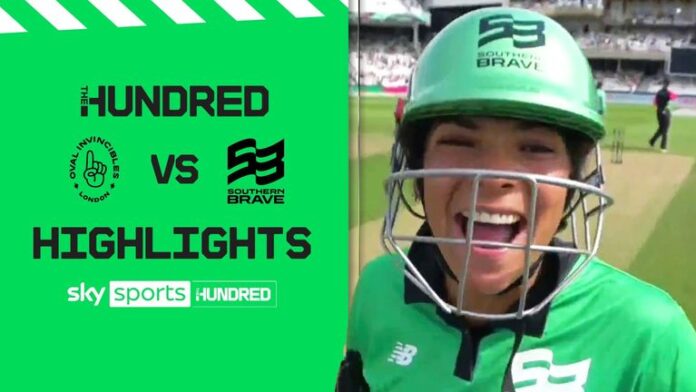 Smriti Mandhana starred with the bat, the India opener striking 10 boundaries in an enterprising 46 off 25 balls as the Brave posted 153-8 after being put into bat first at The Kia Oval.

But it was the Brave spinners who dominated the contest, proving the undoing of many an Invincibles batter. Georgia Adams, who was with the Invincibles for their win last year, and Danni Wyatt finished with identical figures of 2-16, the former claiming the key wickets of Lauren Winfield-Hill (25 off 19 balls) and Player of the Match from the 2021 final, Marizanne Kapp (19 off 9), both bowled.

Australia leg-spinner Amanda-Jade Wellington (1-33) also bowled Mady Villiers (6) before Wyatt pitched in with a pair and part-timer Sophia Dunkley (1-8) got in on the act as the Invincibles finished on 141-7.

Earlier, 17-year-old left-arm spinner Sophia Smale (2-12) had impressed for the Invincibles, claiming the scalps of England international Wyatt (14) and Australia’s Tahlia McGrath (5) as wickets regularly tumbled in the Brave innings, but their total ultimately proved to be more than enough to avenge their defeat in the 2021 final.

The Brave lost only once in their eight group games going into last year’s final only to then suffer a 48-run hammering at the hands of the Invincibles. They have again started the 2022 in dominant fashion, with two wins from two.

After a bumper four-game Sunday, the Hundred then continues apace on Monday with a double header from Edgbaston as Birmingham Phoenix face Trent Rockets in both the men’s and women’s tournaments.

The women are up first from 3pm, with the men to follow from 6.30pm. Both games are live on Sky Sports The Hundred and Sky Sports Mix and are also available for free via live streams on skysports.com, the Sky Sports App and the Sky Sports Cricket YouTube channel.