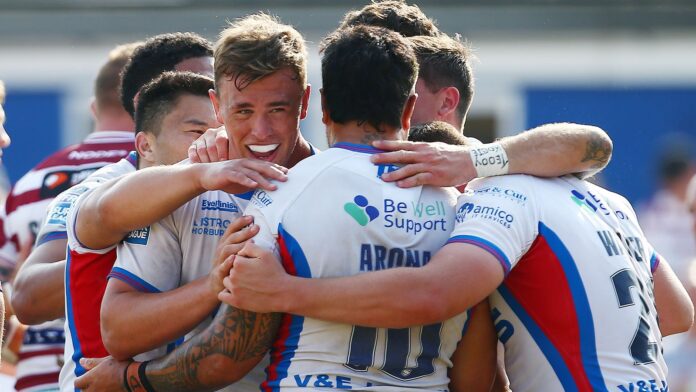 Wakefield Trinity took a huge step towards Betfred Super League survival with an impressive 30-12 victory over Wigan Warriors at the Be Well Stadium.

Halves Jacob Miller and Mason Lino did the damage in the sweltering heat, Miller grabbing a try and Lino kicking five goals, to increase the pressure on Toulouse.

Wakefield appeared to have taken the lead in the fourth minute when Miller dummied his way over, but the try was chalked off for obstruction. Bevan French then went close for Wigan five minutes later, but good defence held him out.

Trinity finally broke the deadlock when a quick shift to the right was finished off by a diving Lee Kershaw, but Lino hooked his conversion attempt wide.

The home side extended their lead in the 16th minute, Jai Whitebread breaking a tackle and touching down under the posts, and Lino added the extras to make it 10-0.

Wakefield were playing like a team possessed and the Warriors could not handle their energy or enthusiasm. In an attempt to reignite their misfiring attack, Wigan moved French to full-back and Jai Field onto the right wing.

Mike Cooper went close to getting the visitors off the mark but lost the ball as he tried to barge over the try-line.

Trinity frustrated Wigan with their hard running and ball movement and then Miller added his side’s third try. The half-back stepped his way over before Lino nailed the conversion to take the lead to 16-0.

Wigan finally hit back when French danced his way across the field before finding Sam Halsall with an offload to score, while Harry Smith made no mistake with his kick.

Right before half-time, Lino landed a penalty goal from right in front to make it 18-6 at the break and in the second half, it went from bad to worse for the Warriors when Patrick Mago was sent to the sin-bin for a crusher tackler on Corey Hall.

Wakefield started the half with intent again, forcing Field back into a goal-line drop-out, but in the stifling conditions, both teams found it hard to maintain possession and complete their sets as fatigue set in.

French went close with another attack but his dangerous grubber-kick bounced into touch and Wigan found it hard to build field position as Trinity dominated the middle third of the field. With 18 minutes left Miller went for a drop goal attempt but the effort was charged down.

Wakefield showed tremendous urgency to repel wave after wave of Warriors attacks and before Kelepi Tanginoa crossed to give them some breathing space.

Field went over late on for a brilliant consolation try before Lewis Murphy responded with a score of his own to close out the vital win.

“We’re not home and hosed, we’re not done yet. We’ve still got four games coming up in a short period of time, which
is a challenge in itself for us, and trying to keep the bodies and minds as fresh as possible to deliver that again, because that’s what we need to do.

“Toulouse are not going to die wondering, they’re going to throw everything at their challenges ahead. We have to worry about ourselves and not rely on what they’re doing.”

“Wakefield were very good, they forced a lot of repeat sets. We were chasing the game. Today [compared with last week’s win over Warrington Wolves] I knew we were second best.

“It was a very determined Wakefield team who fought their way for victory and deserve commending.”

Wakefield make the trip to the East Coast on Friday to face Hull FC, live on Sky Sports (8pm). Wigan are at home on the same night when they host bottom side Toulouse (8pm).