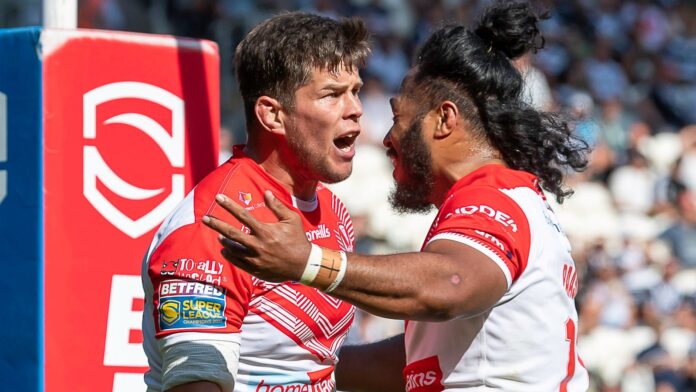 St Helens ran in 11 tries against Hull FC to take a step closer to securing the Betfred Super League’s League Leaders’ Shield; The scoreline marked the third time the Black and Whites had conceded 60 points in 2022

St Helens took another step towards claiming the League Leaders’ Shield after humiliating Hull FC 60-6 at the MKM Stadium, with the Black and Whites’ play-off hopes now hanging by a thread.

The reigning champions, missing a few key stars to injury, had to work hard at the start of the match to combat an energetic and enterprising Hull FC team, but ultimately were never in doubt of getting the result, having too much class for a home side still ravaged by injury and suspensions themselves.

Once Saints got in front on the half-hour mark, it was all one-way traffic, with the visitors notching up 11 tries in total as Hull conceded 60 points for the third time in 2022.

Agnatius Paasi was outstanding for the visitors, with his offloading proving the catalyst for the Saints onslaught, to which Hull FC had no answer and are now in serious danger of missing the play-offs altogether.

There was little sign of what was to come when the home side took the lead inside five minutes with a converted try out wide to Jack Walker.

But Saints showed patience and class to score from deep and level matters, with Will Hopoate supporting a Konrad Hurrell break to open his side’s account for the afternoon.

As the game wore on, the energy started to drain from Hull FC as Saints found their rhythm in attack, taking the lead after half an hour through Tommy Makinson, who finished well on the right edge.

The visitors were now well on top and hit Hull with three tries in the final 10 minutes of the half, with Hurrell burrowing over either side of a double from Louie McCarthy-Scarsbrook to take a commanding lead into the break.

Hull FC needed a good start to the second half but produced anything but, with silly penalties contributing to an avalanche of point to Saints, with the home side not touching the ball for the first 10 minutes after the break.

Ben Davies darted over before Hurrell and Makinson added a second each in nine minutes to end the game as a contest.

There was simply no answer from Hull FC, whose defence was ripped apart through the middle and on both edges, and the scoreline continued to mount up as Saints cut loose with three more tries in the final quarter.

Sione Mata’utia darted over out wide to join the scorers before Joey Lussick split the defence through the middle to race away from long range.

With Hull FC still reeling from losing Danny Houghton to a head knock, the visitors rounded off the scoring with a second try to Davies, as Saints completed a demolition and inflicted the Black and Whites’ third heavy home defeat in a row.

Hull FC are back in action on Sky Sports on Friday when they host Wakefield Trinity (8pm). St Helens are at home on the same evening when they face the Black and White’s cross-city rivals Hull Kingston Rovers (8pm).