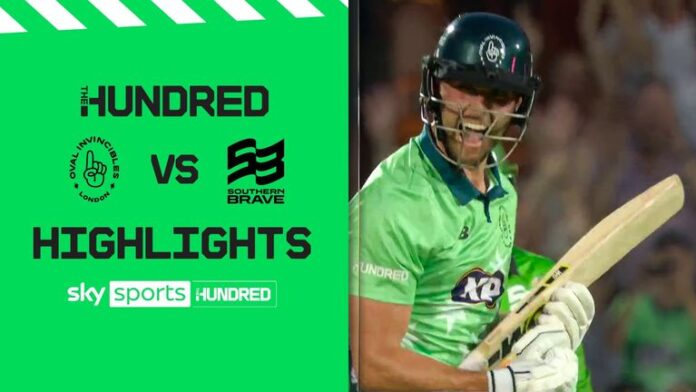 Will Jacks smashed the second century of The Hundred as Oval Invincibles chased down Southern Brave’s 138-run target with 18 balls to spare; Jacks hit eight sixes in his 108no off 48 balls; Jason Roy bowled for two-ball duck – his third in four innings – to continue his dreadful run

Will Jacks smashed a sensational, unbeaten 108 off 48 balls as Oval Invincibles romped to a seven-wicket win over defending champions Southern Brave – though Jason Roy’s wretched run of form continued as he returned a third duck in four innings.

There could not have been more contrasting fortunes for the two Invincibles openers, with England international Roy clean-bowled by George Garton second ball and Jacks showing precisely the sort of talent that could see the 23-year-old a contender to potentially replace his team-mate at the top of the order on the international stage.

Jacks hit 10 fours and eight massive sixes, including one that was struck out of the ground, while his seventh brought up his century and his eighth – off the very next ball – clinched a comfortable victory as the Invincibles chased down 138 with 18 balls to spare at The Kia Oval.

Jacks’ ton is the second of The Hundred, following off the back of Will Smeed’s 101 not out off 50 balls for the Birmingham Phoenix, also against the Brave, on Wednesday.

Left-arm fast bowler Reece Topley (3-24), who has enjoyed a fine summer for England, earlier starred with the ball for the Invincibles, claiming the key wickets of Quinton de Kock (8) – Rilee Rossouw taking a terrific catch – and Alex Davies (4) after the home side won the toss and opted to field first.

Marcus Stoinis (37 off 27 balls) did his best to rally the innings before he fell to Pakistan paceman Mohammad Hasnain (1-27), while captain James Vince (15 off 22) and Tim David (22 off 17) too couldn’t kick on after getting starts, the latter becoming Topley’s third victim.

Garton lifted the Brave’s spirits with just the second ball of the Invincibles’ reply, knocking back Roy’s off stump to continue his disastrous run of form – the England opener has just 10 runs to show from his four innings in the tournament.

Rossouw was run out for 10 and captain Sam Billings fell for eight to James Fuller, but Jacks was creating carnage at the other end, first racing through to 27-ball fifty, before then bringing up his hundred in the nick of time as the winning runs were smashed into the stands.

The win was the Invincibles’ third straight after defeat in their tournament opener, while for the Brave it’s the opposite as, having begun their title defence with victory, they’ve since lost three in a row.

Hero of the Match, Will Jacks said: “That was a pretty amazing feeling.

“The most special thing was, every time I got on strike, everyone was cheering; I could feel that anticipation.”

[On England hopes]: “There are so many good players out there that loads of people could be mentioned – obviously Smeedy scored the first hundred the other day and then I’ve done that tonight.

“There’s so much competition, which encourages you to keep working hard. Obviously we want to play for England, so we’ve just got to keep pushing.”

Oval Invincibles, Sam Billings said: “Tonight, that was all about one man really, wasn’t it? Seriously special from Will Jacks.

“He deserved his hundred from ball one. He looked as if he was playing on a different wicket.

“He has been in class touch all year. And he showed it here tonight. On a good wicket, once he got in, there was no stopping him.”

[On Jason Roy’s form]: “It’s a horrible place to be. We’ve all been there. But he is such a world-class performer, that it will turn. It’s just about trusting that process.”

After a bumper four-game Sunday, The Hundred continues apace on Monday with a double-header from Edgbaston as Birmingham Phoenix face Trent Rockets in both the men’s and women’s tournaments.

The women are up first from 3pm, with the men to follow from 6.30pm. Both games are live on Sky Sports The Hundred and Sky Sports Mix and are also available for free via live streams on skysports.com, the Sky Sports App and the Sky Sports Cricket YouTube channel.