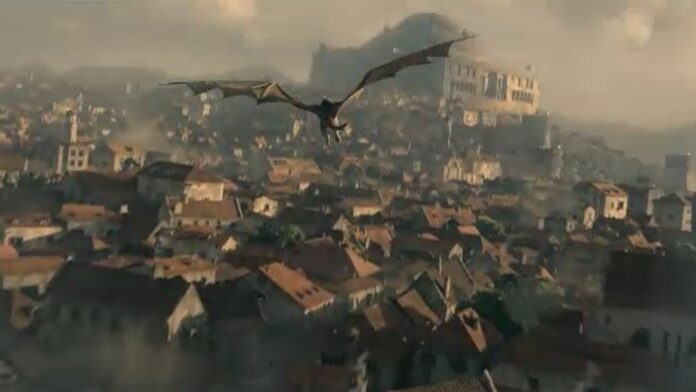 The weight of expectation for a TV show doesn’t come much heavier – as the first Game Of Thrones prequel is about to arrive on our screens.

Highly anticipated, and reportedly costing around £16m per episode, the cast is aware there’s plenty riding on this.

“I suppose that Thrones left a huge cultural footprint, and we’re never going to be able to lay the same one, but we’re trying to do something original and something new and something that feels like it speaks our own,” Matt Smith, who plays Daemon Targaryen, told Sky News.

Paddy Considine who plays Daemon’s brother King Viserys says the excitement for the show does come with a little pressure.

“Maybe I’m not as wise as I thought I was, but, you know, it was already a phenomenon that existed, so I wasn’t getting into something blindly, you know?”

“But at the same time, I might be a bit naive in thinking I just do the work and let it speak for itself and then everyone will leave me alone.”

More on Game Of Thrones

But no matter what fans thought of the in-some-quarters controversial ending, it was really just the start of what will be a huge franchise with several spin-offs in the works – a model we’re familiar with thanks to Marvel and Star Wars.

There’s no end to the opportunities for prequels and sequels, as long as viewers remain loyal to the throne.

And with off-the-scale production design and a crew of 2,000 people, it was always going to be a challenge making this – and that is before you throw in a pandemic.

Even as we speak to showrunner Miguel Sapochnik, he is at home, as he has tested positive for COVID-19, and says the crew felt its impact all throughout making the show.

He explained: “The fact is, when suddenly you go from 500 extras in any one scene, to a maximum of 150, and yet everyone costs five times as much (because you have to hire them three days before, in order to get them tested, so they can go on the set and be safe) and then they all have to ride in separate minibuses – suddenly the cost of making everything balloons in times of COVID.

“But then you’ve got the safety aspects – one person gets it, and suddenly….

“I got ‘close contacted’ I don’t know how many times, Ryan [Condal, fellow showrunner] on the very last day of shooting got COVID, and I’ve had COVID more times now than I know how to remember.

It may be a fantasy series, but a story about women taking power feels particularly pertinent now.

Emma D’Arcy, who plays Princess Rhaenyra Targaryen – the firstborn child of the king – says the show deals with themes of misogyny.

“Crucially within this world, womanhood is equated with incapacity, with motherhood, with passivity, with amenability,” she said.

“And then you bring in a character, a female character who is looking to rule, and I feel like one of the questions of the show is: How do you unravel those prejudicial views? And also, as a woman looking to rule, how do you convince your electorate, your male subjects, that you are not other? How do you do that?”

“I feel like that’s a fundamental question of the work, which is why I wanted to do it.”

The possibility of a female leader, the backstabbing, the in-fighting, this latest instalment from Westeros seems perhaps not far from Westminster, but will no doubt keep audiences gripped.

House Of The Dragon starts 22 August on Sky Atlantic and streaming service NOW.