Home Sport Ferrari: No changes needed despite F1 errors | What now for Leclerc? 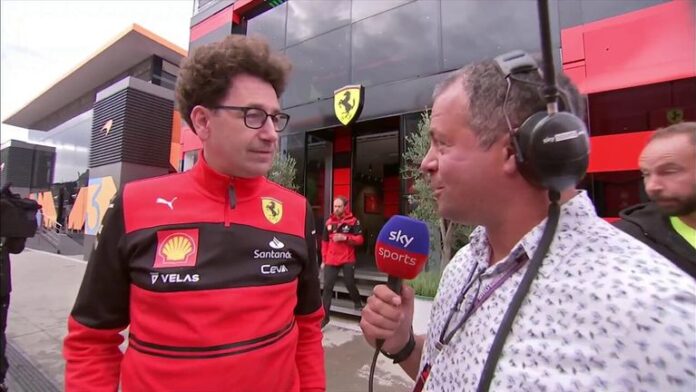 Ferrari have cost Charles Leclerc a huge amount of points in the championship through strategy mishaps but team boss Mattia Binotto says there will be no changes; season resumes with Belgian GP on August 28, live on Sky Sports F1

Mattia Binotto has shut down suggestions that change is needed at Ferrari despite the string of errors that have left Charles Leclerc facing a monumental task against Max Verstappen in the championship.

Leclerc is now 80 points behind Verstappen in the standings and while he has made his own unforced errors, Ferrari have cost the Monegasque around a century of points through unreliability and strategy blunders.

The Hungarian GP was the latest of those, as Leclerc fell from the race lead back to sixth, with Verstappen taking an unlikely win from 10th on the grid.

That led to calls for changes to Ferrari’s team – with many calling for team boss Binotto’s head – although the Italian insists there is no reason to panic.

“It’s not a matter of bad luck, and there is nothing to change as well,” Binotto said in Budapest.

“Certainly there is something that you need to look at and understand why. But if I look again at the balance of the first half of the season, there is no reason why we should change.”

Binotto has also backed Leclerc to respond after the summer break, with the season resuming with the Belgian GP on August 26-28. Every session is live and exclusive on Sky Sports F1.

How many points have Ferrari lost Leclerc this season?

Throwing away winning positions has been the story of Ferrari’s season and there is a very valid argument to suggest they have cost him over a century of points against Verstappen via unreliability and strategy.

Spanish GP: Leclerc was comfortably from pole leading before a Ferrari engine failure.
Lost points: -25. Leclerc looked certain to win this race, and ended up with nothing.

Monaco GP: Leclerc was leading a Ferrari one-two before the team reacted too late to the changing weather conditions, with Sergio Perez undercutting him. Leclerc would then have a slow double stack pit-stop behind Carlos Sainz, and finish fourth.
Lost points: -13. Without being outsmarted by Red Bull’s strategy, a race win was absolutely there for Ferrari.

Azerbaijan GP: Leclerc had the lead, again from pole, before his engine blew on Lap 20.
Lost points: -25. Leclerc would have had to have made a one-stop strategy work but he had the pace to win.

Canadian GP: Leclerc had to take an engine penalty due to the previous failures and start at the back of the grid, though he still came back to finish fifth.
Lost points: -15. Verstappen would win, but only just ahead of Sainz. As Leclerc has had the edge over Sainz all season, it is not foolish to suggest that Leclerc could have won this race without his engine penalties.

British GP: Again, Leclerc was leading before a Safety Car, which led to pit stops up and down the field for fresh tyres. But Ferrari – while pitting Sainz for the faster softs – kept Leclerc out on 14-lap old hard tyres, leaving him defenceless to those behind him.
Lost points: -13. Leclerc finished fourth but if stopping for softs, he would surely have won. Ferrari said they were nervous of others staying out and taking the lead, but Leclerc would have had the pace to overtake.

Hungarian GP: Ferrari should surely have left Leclerc out on his mediums, as he wanted, before switching him to softs at the end, when he could have chased down Verstappen. A lost win? Absolutely.
Lost points: -17.

Given Verstappen went on to win all but two of the above races (Monaco and Silverstone) and has only had two DNFs himself, Leclerc could and probably should be leading this championship.

Massa: Leclerc has to be patient

“Definitely Charles is not happy at all, but he needs to be patient.

“If he starts fights now, it will not help the team, but also Charles. We cannot forget that in France he made a mistake, he just gave away a very good possibility to win the race and score the right amount of points.

“You need to be patient, even if you’re not happy with the mistakes and the decisions, you need to fight professionally, not showing outside. If you do that, you’re not helping both sides, even if Ferrari made more mistakes this year.”

Why Binotto has to turn things around ‘quickly’

“I know him very well, I raced for him already, we worked together for a very long tine.

“He was an engineer of the engines, then became the boss. He’s a very good engineer, very professional guy, he understands a lot on the technical side.

“He’s also a good guy, I like him as a person. But, at the end of the day, you understand the results are not coming as they should. We need to say he’s part of it, they need to be a little more calm.

“Many mistakes that happen at the beginning of the season are still happening and this is something that cannot continue. He needs to turn things in a quick way, or he can pay for it.”