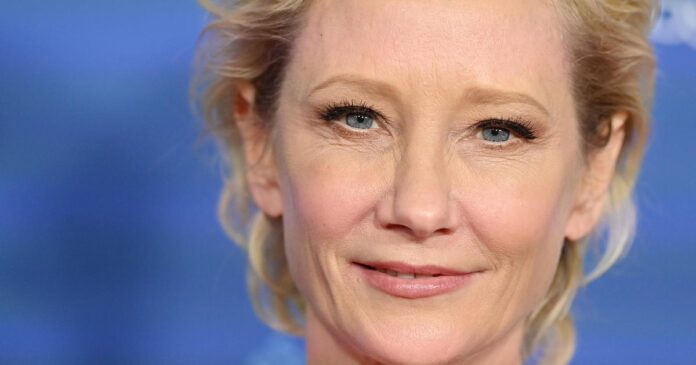 Los Angeles — Actor Anne Heche was on life support while a medical team worked to see if her organs could be donated, after she suffered a catastrophic brain injury in a fiery crash a week ago.

A representative had previously said that Heche was in a coma in “extreme critical condition” and not expected to survive. “It has long been her choice to donate her organs and she is being kept on life support to determine if any are viable,” the statement said.

In a statement Friday, her family said, “Today we lost a bright light, a kind and most joyful soul, a loving mother, and a loyal friend. Anne will be deeply missed but she lives on through her beautiful sons, her iconic body of work, and her passionate advocacy. Her bravery for always standing in her truth, spreading her message of love and acceptance, will continue to have a lasting impact.”

Heche was hospitalized at the Grossman Burn Center at West Hills hospital north of Los Angeles with what her representative described as “severe anoxic brain injury.” Such an injury is caused by a sustained lack of oxygen to the brain.

On the morning of Aug. 5, Heche’s car smashed into a house in a neighborhood in West L.A. and a fire erupted with the car embedded inside the home.

Earlier Thursday, police said they were investigating Heche for driving under the influence. Detectives with a search warrant took a sample of her blood and found narcotics in her system, LAPD spokesperson Officer Jeff Lee said.

Toxicology tests, which can take weeks to complete, must be performed to identify the drugs more clearly and to differentiate them from any medication she may have been given for treatment at the hospital.

Evidence is still being gathered from the crash, police said, and they would present a case to prosecutors if it is warranted when the investigation is complete.

A representative for Heche declined comment on the investigation.

On Tuesday, Heche spokesperson Heather Duffy Boylston said she had been in a coma since after the accident, with burns that required surgery and lung injuries that required the use of a ventilator to breathe.

“Anne had a huge heart and touched everyone she met with her generous spirit. More than her extraordinary talent, she saw spreading kindness and joy as her life’s work — especially moving the needle for acceptance of who you love,” Thursday’s statement said. “She will be remembered for her courageous honesty and dearly missed for her light.”

The woman who was living in the house at the time of the crash, Lynne Mishele, posted a video on Instagram Thursday.

“I’m still recovering and trying to figure out up from down but I did want to send a huge, huge thank you to everybody from all over the world, for the overwhelming amount of love and compassion and generosity and kindness that people have shown over the past week,” she said in the video. “It’s obviously been the most insane, traumatic time … Eventually I’ll try to get back to everybody and try to read everybody’s comments.”

A GoFundMe page has been set up for her.

Heche, 53, was among the most prominent film stars in Hollywood in the late 1990s, playing opposite actors including Johnny Depp (“Donnie Brasco”) and Harrison Ford (“Six Days, Seven Nights”).

She recently had recurring roles on the network TV series “Chicago P.D.” and “All Rise,” and in 2020 was a contestant on “Dancing With the Stars.”

In a 2001 memoir, she discussed her lifelong struggles with mental health.

Fellow celebrities and former co-stars shared messages of support for Heche after the crash.

Among them: Actor Alec Baldwin, who took to Instagram to share his thoughts on Heche, with whom he’d worked.

“Hey, I just want to send out my best wishes and all my love to Anne Heche,” Baldwin said in a video. “Anne is an old pal of mine and I did a very 90s thriller with her called ‘The Juror.'”

“There’s not a lot of women I’ve worked with that are brave in the way that Anne is brave,” he said. “She would do anything, she would do anything. We did not a lot of crazy things in the movie, but she was very original.” Baldwin added that he and Heche also worked together on the play “The Twentieth Century,” for which Heche was nominated for a Tony in 2004.

“I love you Anne. I love you. I think you’re such a talented person and I hope everything is OK and you come through this,” he said.