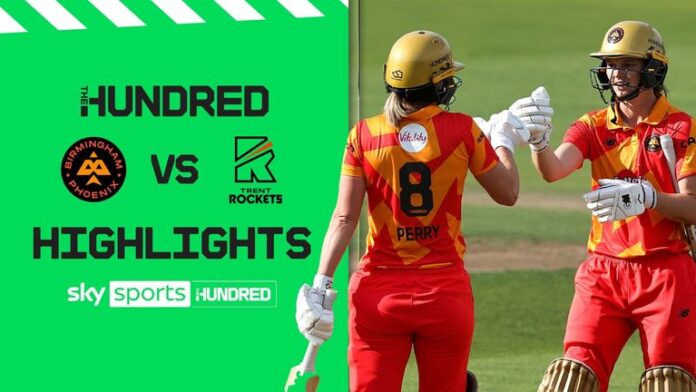 An unbeaten stand of 78 between Amy Jones and Ellyse Perry helped Phoenix make it two from two with an eight-wicket victory over the Rockets at Edgbaston; Emily Arlott’s 3-19 helped restrict the visitors to 116-9 from their 100 balls

Arlott was the pick of the bowlers, claiming 3-20, including the key scalp of Rockets captain Nat Sciver, and was ably supported by Georgia Elwiss and Sophie Molineux, who picked up two wickets apiece for the home side.

Rockets never really looked as if they had an answer for Phoenix’s all-round bowling brilliance, with all bar three batters falling for single-figure scores as they slumped from 70-1 to a sub-par total of 116-9.

Phoenix then cantered home with the bat in reply, with Jones and Ellyse Perry posting an unbeaten 44 and 39 respectively in their third-wicket stand to secure an unbeaten start to the season.

Rockets initially struggled to find any form of momentum in their innings. Molineux’s first set of 10 deliveries cost her just six runs inside the powerplay and included the wicket of England opener Bryony Smith for one.

Sciver, making her first Hundred appearance of 2022, and Elyse Villani were then able to build a solid foundation, however, taking the Rockets up to 70 for one thanks to their half-century partnership.

It was a partnership of stability rather than intent, though, and when Villani holed out to Perry at long on off the bowling of Elwiss for 33, it signalled the start of a miserable collapse.

Sciver herself departed not long after for an uncharacteristically quiet run-a-ball 31 before overseas star Mignon du Preez hooked an Issy Wong short ball straight into the hands of Gwen Davies for just two. No 10 Kathryn Bryce was the only other Rockets batter to reach double digits as the visitors crumbled.

Phoenix did not exactly get off to a flier in reply but had no need to with such a low total to chase. Sophie Devine holed out attempting to line up Sciver and departed for 16, while Eve Jones went for 16 not long after, but from then on it was plain sailing.

No real risks were required, and Perry and Amy Jones were able to manipulate the field and pick up singles for much of the middle of the innings. Indeed, Jones in particular looked in fine touch as she racked up her 44 off 32 deliveries.

A succession of glorious shots off England’s Sarah Glenn flew off the bat and over the boundary rope for four to bring her side within touching distance of victory.

The second, a reverse-paddle past point, stood out as a moment of brilliance in a largely jeopardy-free chase as she and Perry accelerated at the death to see them over the line with nine balls to spare.

Not even last week’s hat-trick hero Alana King could inspire Rockets, while big names Glenn and Katherine Brunt too were unable to make an impact and both finished wicketless.

“It felt like the run-rate was creeping up at stages and they bowled really tight and it felt quite hard to find the boundary. Once a couple got through, it felt like we were catching up with it.

“It’s huge [to win this game]. With the games coming thick and fast it’s great. We’ll obviously be looking to win every game and keep that going as long as possible.”

“Then the way Amy and Ellyse finished the game off, that just shows their experience.

“We know how important it is to get early wins in a competition like this, which is such a short tournament for us. We take on the Superchargers on Friday and that’s going to be another massive game, and if you win that you’ve got your foot in the door for the later stages of the tournament.”

Trent Rockets are back on home turf on Wednesday when they host Oval Invincibles (3.30pm). Birmigham Phoenix, meanwhile, travel to Headingley to face Northern Superchargers on Friday, August 19 (3.30pm).