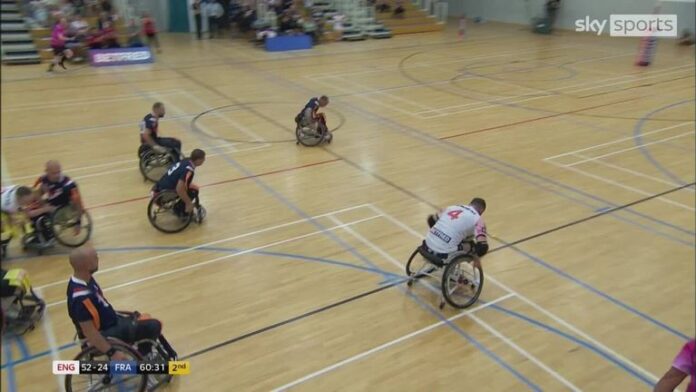 By his own admission, Jack Brown was never much of a sportsman in his youth. That makes his ascent to being recognised with the award for the best wheelchair rugby league player in the world even more impressive.

Brown initially took up wheelchair basketball and later the rugby league equivalent as both offered the opportunity to share an activity on an equal level with his younger brother Harry, who lost both legs to meningitis as a baby.

Their sporting careers have since diverged, with his sibling now a full-time member of the Great Britain wheelchair basketball team, but those early years of terrorising opposing teams rather than each other have set them both on paths they never imagined were possible to go down.

“We weren’t very big sports fans at all,” Jack told Sky Sports. “We’d played a little bit of wheelchair basketball together, but I wouldn’t say we were fans of that either.

“We were very lucky we had the opportunity to play together and be part of something like that. That’s where our love for activity and sport grew.

“In high school, I was the kid who would find a hiding space for PE and not get involved, but now it’s completely flipped on its head and that’s what sport can do for everyone.

“We hated each other at home, so getting on the basketball court or the rugby pitch was the place we could connect with each other without being lovey-dovey.”

Brown, along with Martin Norris, is one of the players aiming to be part of this autumn’s Wheelchair Rugby League World Cup in England who were part of the national team in their early days. Indeed, Brown played in their first international back in 2005.

The Halifax native now resides in Australia where he is at the forefront of the sport’s development in the state of Queensland and in January 2020 was acknowledged for his on-pitch achievements by being named as the first wheelchair Golden Boot winner.

The Covid-19 pandemic stalled the sport’s development, but the return of international matches last year has helped wheelchair rugby league pick up where it left off and Brown is delighted to have been part of those formative years.

“It’s almost like you take the sport itself as your baby and it’s like watching a kid grow up,” Brown said.

In high school, I was the kid who would find a hiding space for PE and not get involved, but now it’s completely flipped on its head and that’s what sport can do for everyone.

“It’s almost at that point now where you don’t need me looking after you, you’re all grown-up now and you’re teaching me things. As a sport itself, it has matured and is becoming an adult.

“It’s an inclusive sport and anyone can play, and it’s pushed really to another level in Queensland.

“It’s really good for [Australia’s] development, which is good for the World Cup. It makes our job harder as England, but it is really good.”

The recent England training camp as part of preparations for this year’s World Cup, which begins at the Copper Box on November 3 with a Group A double-header which sees England face Australia and Ireland take on Spain, marked the first time Brown had been able to reunite with the squad since the start of the pandemic.

Despite being over two years since he was last with his compatriots and having missed June’s 62-48 win over World Cup holders France, Brown comfortably slotted straight back in and is already savouring the prospect of taking part in a home tournament in which England will attempt to wrest the title back from the reigning champions.

“It’s been really good getting back to see everyone,” Brown said. “When you get back into the environment, they’re a good bunch and not much has changed.

“The World Cup going to be awesome. Being back in camp has reminded me of what a good group we have here and all the characters we have.

“Being in that environment is like a drug. I really feed off the energy of these players.”