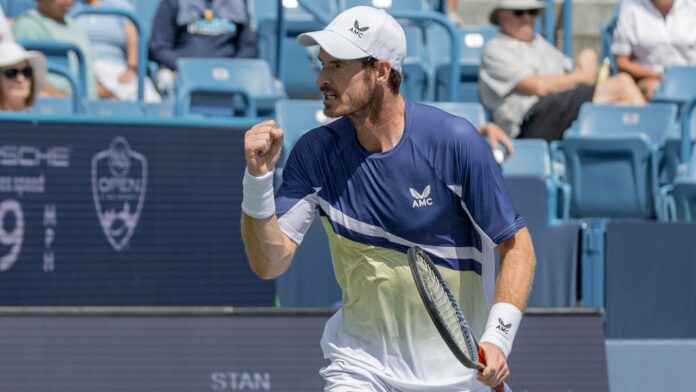 Andy Murray survived a thrilling encounter with long-time rival Stan Wawrinka to progress to the second round of the Western & Southern Open in Cincinnati where he will meet Cameron Norrie.

The Scot took the opening set in a tie-break as momentum swung freely between the two veterans.

However, the second set went the way of Wawrinka as Murray tightened up with muscle cramps.

Murray acknowledged the physicality of the match in his on-court interview.

“The court is pretty lively when the weather is like this. Physically I feel tired,” he said.

“I had some issues with cramp during the match, the same as Washington, so that is something I need to get on top of.

“I tried to take the ball on a little more and finish points at the net. I wasn’t that successful when I came up, but the intention was there. I was a little more offensive on the second-serve return. Last game I was just fighting, trying to find a way through.”

It was the Scot’s 37th match on the ATP Tour this year, the most he has managed to get under his belt since 2016.

“In terms of how I pulled up after matches and stuff has been the best I have felt in a really long time,” Murray told reporters.

“So that’s good. I would like my tennis to be better at times because I’m still convinced that it can be better than where it is right now.

“It’s not been easy these last few years to stay fit and healthy and play enough tennis. That’s a positive thing that I got to play lots of matches or more matches this year.”

While Murray reached the finals in Stuttgart and Sydney this year, he lost his opening matches at the National Bank Open in Montreal and Citi Open in Washington and also bowed out in the second round of Wimbledon.

The 35-year-old said the early exits made it difficult for him to take a break and recharge.

“Me and my team are hoping I can get to that level again where I’m consistently getting to the latter stages of events. We will be able to plan and schedule my tournaments better,” Murray said.

“Right now I’m having to play and compete to try and maintain ranking and to hopefully get seeded in the events and get into more tournaments, not have to rely on wildcards. So, yeah, it’s a difficult balance.”

The win sets up a second-round clash with British No 1 Norrie, who was tested by Dane Holger Rune in their opening clash.

In the women’s tournament, Leylah Fernandez suffered a blow to her US Open preparations after losing 6-4 7-5 to Russian Ekaterina Alexandrova, while Wimbledon champion Elena Rybakina was among those advancing as she defeated Egyptian Mayar Sherif 6-3 6-2.

American Sloane Stephens, the 2017 US Open winner, defeated Alize Cornet 6-1 6-0 to set up a meeting with world No 1 Iga Swiatek.