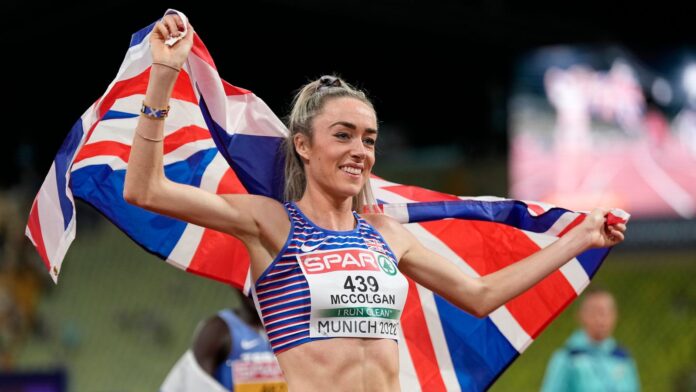 The Scot’s silver medal in Munich adds to her Commonwealth Games gold medal over 10,000m and the silver she won over 5,000m in Birmingham; McColgan is making her debut over the marathon distance at the London Marathon this October

Eilish McColgan followed up her 10,000m Commonwealth title with European silver over the same distance in Munich on Monday night.

Israel’s Lonah Chemtai Saltpeter and Turkey’s Yasemin Can were the only two athletes able to stick with the strong pace McColgan set during the race.

The Scot did the lions’ share of the front running, before Can put in a huge surge around the 8km mark and moved away.

McColgan, as she did in Birmingham, showed her strength to work extremely hard during the closing laps and eventually, shook off Saltpeter to win a silver medal in a time of 30:41.05.

“I’m pleased. I’m obviously disappointed – I would have loved to have become European champion tonight. But tired, tired legs – I definitely felt that,” McColgan told the BBC.

“It’s been probably one of the craziest weeks of my life at the Commonwealth Games, such a big high of emotions and not a lot of sleep.

”So, I found it tough to sort of get myself up again today, but I can’t complain. I did a lot of work tonight and came away with a silver medal,” she concluded.

McColgan arrived in Munich for the European Championship being on the start lists for both the 10,000m and 5,000m and if she takes to the track over the 5,000m, she could finish her summer of meets with four major medals.

“I think it’s going to be tough, two days’ recovery to try to do it all again,” she said.

“But this will be my last track race this season. We’ll have a think about it tonight. I’m sure I’ll be back, I love racing. It’s been a great season so far and to add another medal to that, I’m more than proud.”

At the World Athletics Championships in Eugene, McColgan suffered a hamstring problem and contracted Covid which stopped her from being 100 per cent. However in Birmingham and Munich, McColgan has been race sharp and strong.

Following the conclusion of the European Championships, McColgan will return her attention back to road racing. The 31-year-old is set to make her debut over the marathon distance at the London Marathon this October and will take part in ‘The Big Half’ a month prior.

In her first major year on the track, Brit Samantha Harrison finished in sixth in the 10,000m in Munich in a time of 31:46.87. Harrison is still early in her elite career and continues to get better and better. Jessica Judd came home in 10th after a tough run in the warm conditions in Munich.