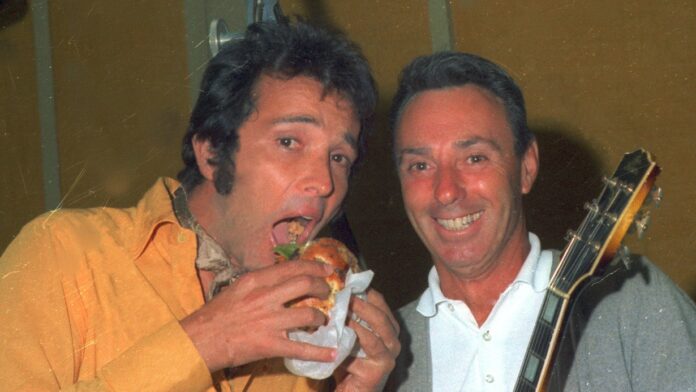 Bill Pitman, guitarist for Los Angeles’ legendary “Wrecking Crew” ensemble of session players, has died. Janet Pitman, his wife, told The New York Times that he died at home under hospice care, several weeks after breaking his spine in a fall. Bill Pitman was 102 years old.

As a session player in California, Pitman helped shape the sound of popular music in the mid-20th century. His extensive résumé includes recordings on the Ronettes’ “Be My Baby” and the Beach Boys’ “Good Vibrations.” He also played the ukulele intro on BJ Thomas’ “Raindrops Keep Fallin’ on My Head,” which became a hit through the 1969 film Butch Cassidy and the Sundance Kid.

Pitman got his start in music from his childhood in New York, taking after his father, a staff bassist for NBC Radio. Though Pitman had made a name for himself as a young jazz musician in his home city, after serving in World War II, he relocated to Los Angeles. In 1951, he successfully auditioned for a spot in Peggy Lee’s band, his first major step toward a permanent place in music history.

Pitman began working as a session artist in 1957, and he quickly became an in-demand session player for Capitol Records and other Los Angeles–based artists. He picked up credits on records by Frank Sinatra, Elvis Presley, Sam Cooke, and Herb Alpert. His session colleagues at the time included Glen Campbell, Carol Kaye, and Leon Russell. In 2008, Pitman appeared in the documentary The Wrecking Crew, where he discussed his work with the informal and expansive group of musicians.

Beyond his credits on radio hits, Pitman contributed to numerous advertising jingles and film soundtracks, such as Fast Times at Ridgemont High and Goodfellas. He also toured throughout 1970s with the likes of Burt Bacharach and Vicki Carr before spending a stint in Las Vegas in the MGM Grand Hotel’s headlining band. After retiring in 1989, Bill Pitman continued to play music privately as a hobby, living in California through the end of his life.