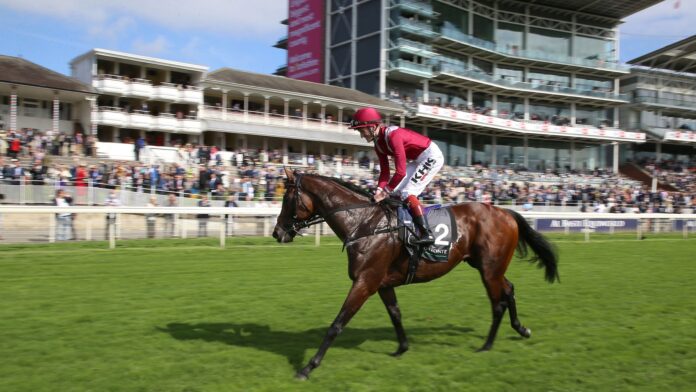 Sky Sports Racing presenter Alex Hammond is back with her blog as well as selections for the week, including a Derby also-ran lining up in Saturday’s Ebor.

Baaeed faces a new opponent in Wednesday’s Juddmonte International Stakes. He tackles an extra quarter of a mile, as he steps out of his comfort zone and tries something different in his bid for immortality.

He’s bred to stay and on paper it shouldn’t be an issue and he seems relaxed enough to take those extra 496 yards in his impressive stride. There’s always an additional pressure with an unbeaten horse, and Golden Horn was also unbeaten when turned over in this race – when sent off 4/9 favourite – by the 50/1 outsider Arabian Queen.

I’m reluctant to mention Frankel when Baaeed’s trainer William Haggas has expressed his irritation at the constant comparison between the two champions, but Frankel also used this race to stretch out beyond a mile and landed the odds in great style for an emotional victory 10 years ago.

Baaeed isn’t quite that short at 2/5 favourite with Sky Bet, but if you fancy him to do something extraordinary and win in a faster time than Frankel, you can back him at 2/1. I hope Jim Crowley needs to deploy a drag-racer’s parachute when he crosses the line to take his record from nine starts and nine wins, to the perfect 10.

This Ebor Festival is such a good meeting and there are some fantastic races on the Knavesmire between now and Saturday evening.

The first race of the four-day fixture isn’t easy for punters with Sky Bet going 8/1 the field for this five-and-a-half furlong contest; the Sky Bet and Symphony Group Heritage Handicap. The headline sponsors are helping us out a touch here though with seven places, rather than four.

I’ve picked out a couple of each-way selections with that in mind. Harry Eustace is making an impressive start to his training career, and he teams up with Hayley Turner with 10/1 shot Ancient Times. He’s only run 14 times and has won five of those with more likely to come.

Look Out Louis also comes here in good form for Julie Camacho, who has snapped up the services of leading apprentice Ryan Sexton. His 5lb allowance is great value and he won on the horse last time out. Rain has largely missed the track (at the time of writing), but this lad won’t really mind if the rain arrives as he has form on a variety of ground.

Elsewhere on the Day One card I like Mill Stream in the Tattersalls Acomb Stakes. Jane Chapple-Hyam is having a wonderful season and it’s great to see the colours of former trainer Peter Harris back on a racecourse. He’s 7/2 with Sky Bet.

I’m looking forward to seeing Secret State on a more conventional track after he hung badly at Goodwood when winning a mile-and-a-half handicap there last month.

This is a step up in class for Charlie Appleby’s colt, but if the St Leger is to be on the agenda, he needs to be at this level now. He’s 15/8 favourite with the sponsors for the Sky Bet Great Voltigeur Stakes.

The booking of Ryan Moore by trainer David Evans for Cuban Breeze in the Celebrate ITM’s 200th Ire Voucher Winner Fillies’ Handicap catches the eye, even if the race title isn’t quite as catchy! She’s 13/2 to win the five-furlong handicap.

There are plenty of opportunities to see top-class horses and find some winners before the week is out, but in summary, I can’t wait to see Stradivarius and hope he can maintain his unbeaten record at York in Friday’s Weatherby’s Hamilton Lonsdale Cup.

He’s even-money favourite to make it win number seven there. Nothing against Andrea Atzeni, but I think the Yorkshire crowd would really get behind the old boy if Frankie had been back in the saddle, but that beautiful friendship appears to be over.

Speaking of Atzeni, I hope he has a good spin on Tyrrhenian Sea in Thursday’s Clipper Logistics Handicap. We last saw the dashing grey finishing last of four in Windsor’s Midsummer Stakes at the end of June, but I feel he has more to give, and he holds an entry in the Cambridgeshire so will need to perform well to be considered for that.

This is only his second start on turf, and he will have to be more streetwise for that. He’s 16/1 for this week’s contest and Sky Bet are paying seven places again, so hopefully each-way value.

Also on Thursday, the Darley Yorkshire Oaks has attracted an incredible line-up. Sir Mark Prescott’s European globetrotter Alpinista will be strutting her stuff in the UK for the first time since winning the Lancashire Oaks last summer.

Oaks winner Tuesday is aiming to put her well-beaten Irish Derby effort behind her. Ribblesdale winner Magical Lagoon is back over from Ireland having won the Irish Oaks last time out.

Recent Pretty Polly winner La Petite Coco is another raider over from Ireland and Andre Fabre is taking on the challenge with Raclette who has a big reputation and is stepping up in grade having won a Group Two last time out. What a race.

Friday it’s the turn of the speedballs in the Coolmore Wootton Bassett Nunthorpe Stakes. York chief William Derby spoke in the week about this race, and it was hard not to get swept along with his enthusiasm.

He suggested the sprint division is wide-open now the Aussies have gone back home and it’s hard to disagree. So, who can pick up the slack?

Richard Fahey has supplemented The Platinum Queen for the race, with her only defeat coming in the Queen Mary at Royal Ascot, and she has won her other three outings, all over this five-furlong trip.

It has cost £40,000 to add her to the field, so she will have to finish in the first three to get that back. With just eight stone and Hollie Doyle on her back, you wouldn’t put it past her.

She’s 5/2 second favourite and 6/4 market leader Royal Aclaim will have to give her 22lbs in weight but let’s not discount last year’s winner Winter Power.

Whilst her power has faded since that famous victory, this is her time of year, and at 16/1 she makes some appeal.

Onto the biggie then and Saturday’s £500,000 Sky Bet Ebor Handicap. The sponsors are non-runner no bet, and offering five places, instead of four. Declarations and draws haven’t been made at the time of writing and with a maximum field of 22, you will have to be rated over 100 to get a run, which rules out some of the protagonists.

The bookies are running for cover with the Irish raiders, most notably Paddy Twomey’s Earl of Tyrone, who heads the market at 13/2 with the sponsors. He’s progressing at a rate of knots and is worthy of his position in the market.

He has an outstanding chance of winning this famous race, but this is the Ebor, I’m going to try and find some value. Is there any chance John Leeper can win a big one?

This one-time Derby horse has been desperately disappointing after promising to do justice to the name he had bestowed on him. He’s named after the late, great, trainer John Dunlop, whose son Ed trains this gorgeous son of Frankel.

He’s become the forgotten horse and trips and equipment have been tinkered with since his last win in May 2021. If all else fails, try something new, and Dunlop Jr is now opting for handicaps.

He doesn’t look thrown in off his rating, but it does ensure a place in the field, so maybe he can show some of the sparkle of his early days on a racetrack.

He’s hardly an old has-been at the age of four and maybe this race can spark the revival. He’s a 16/1 shot at the time of writing and his trainer has enjoyed a much better year in 2022 and is already 10 winners past his entire 2021 total.

He does best with stayers, having enjoyed great success with the likes of Red Cadeaux, Snow Fairy, Trip To Paris over the longer distances. Adam Kirby is jocked up on the horse and he has a good record for the trainer, so there are ticks in a few of the necessary boxes.