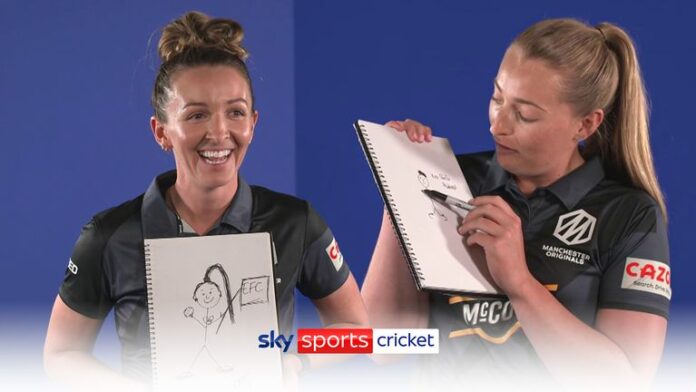 Kate Cross comes out on top in battle with No Balls Podcast co-host Alex Hartley as Manchester Originals beat Welsh Fire by 11 runs in The Hundred; Deandra Dottin and Sophie Ecclestone smash hosts to 156-2 before visitors make 145-3 in reply despite Hayley Matthews’ 69 from 41 balls

West Indian star Dottin was out second ball in the loss to Trent Rockets on Saturday but powered 67 not out from 37 deliveries against Fire after being dropped in the deep on 13 by Fi Morris as Originals posted 156-2.

That total looked set to be overhauled by Fire as Dottin’s fellow West Indian Hayley Matthews (69 off 41) teed off and shared a 110-run opening stand with skipper Tammy Beaumont (45no off 42).

However, Matthews was then bowled by Sophie Ecclestone before Dottin took two wickets in two balls – dismissing Australians Rachael Haynes (11 off 7) and Annabel Sutherland (0) – to swing momentum Originals’ way.

Fire could only muster 145-3 in the end as they slipped to a second straight loss after tumbling to defeat at home to Birmingham Phoenix at the weekend.

With the bat, Dottin struck eight fours and two sixes, bossed a stand of 67 from 48 balls with Emma Lamb (35 off 41), and then played second fiddle to Ecclestone (36no off 18) in a riotous and unbroken partnership of 62 from the final 31 deliveries.

With the ball, she had Haynes pouched at mid-on and Sutherland at midwicket from the 82nd and 83rd balls of the innings respectively with the score on 123, before Grace Potts, Lamb and captain Kate Cross denied Fire the boundaries they needed.

Originals’ victory meant Cross got one over her No Balls Podcast co-host Alex Hartley, who played for Originals last term before switching to Fire for the 2022 campaign.

Left-arm spinner Hartley (1-17 from 20 balls) was the pick of the Fire attack, taking the wicket of Lizelle Lee (3), but off-spinner Matthews saw her 20 deliveries pelted for 40 runs.

Dottin said: “The main thing was to get myself in and when I did that put a total on the board for the team. I thought we had enough runs if we bowled to our targets and stuck to the basics. It is very important having that winning feeling again. It is only going to take us forward to have more wins.”

The Hundred continues on Wednesday with a double header at Trent Bridge as Trent Rockets face Oval Invincibles.

The women are up first (3pm start) as both Rockets and Invincibles look to bounce back from defeats to Birmingham Phoenix and Southern Brave respectively in their previous encounters.

Coverage of the men’s match then gets going at 6pm on Sky Sports Mix ahead of a 6.30pm start. Eyes will be on Invincibles openers Will Jacks and Jason Roy with Jacks slamming a 47-ball hundred against Brave last time out after Roy was dismissed for a third duck in four innings.