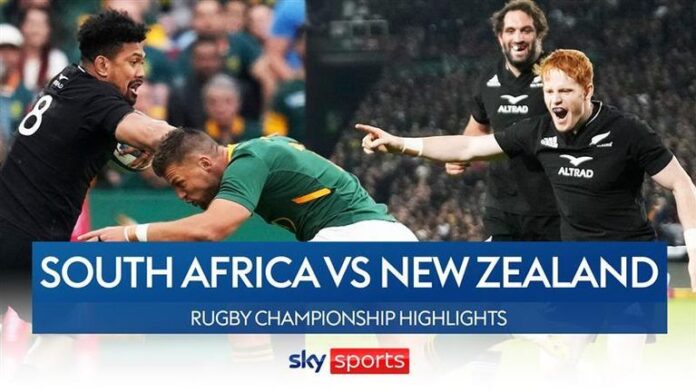 Victory over South Africa in Johannesburg ended a run of three straight Test losses and five defeats in six Tests for New Zealand, the worst return by an All Blacks team in 24 years; Board of New Zealand Rugby met in Auckland on Wednesday to discuss Ian Foster’s future

New Zealand Rugby (NZR) on Wednesday endorsed Ian Foster as the right man to coach the All Blacks through to next year’s World Cup but said he would have more hands-on support from selector and strategist Joe Schmidt.

Foster had come under huge pressure after the All Blacks suffered three consecutive defeats against Ireland and South Africa but was relieved after the rebound win over the Springboks at Ellis Park last Saturday.

Local media had speculated Canterbury Crusaders coach Scott Robertson was poised to replace him but New Zealand Rugby’s board unanimously backed Foster at a meeting earlier on Wednesday, officials said.

“Some of the steps we’ve seen in recent weeks give us a huge amount of confidence going forward,” New Zealand Rugby chief executive Mark Robinson told reporters. “We’ve had some really fantastic conversations with (Foster)… We are backing (the staff) through to the World Cup.”

Foster, sitting alongside Robinson, said he was delighted with the endorsement from the CEO and board.

“I just want to remind people it’s a privilege to be in this job. I believe in the plan I’ve got and believe we’ve got great support behind us,” Foster said.

Foster, appointed in 2019 after his former boss Steve Hansen stepped down after the World Cup in Japan, has struggled to reproduce the same results as his predecessor following the retirements of a number of world-class players.

He survived an NZR review after the 2-1 defeat in the home series against Ireland in July, with his former assistant coaches John Plumtree and Brad Mooar axed instead. Robertson’s former assistant coach Jason Ryan came in as forwards coach and selector Schmidt was appointed to work with Foster on strategy and attack as part of that shake-up.

Former Ireland coach Schmidt did not travel with the team to South Africa but will now play a bigger role in match-day preparations, which Foster welcomed.

“I’m delighted he’s here for the right reasons, he complements the group we’ve got,” Foster said.

NZR and Robinson came in for heavy criticism from former players and pundits over their handling of the Foster question, with Robinson refusing repeatedly to endorse him as coach in a media conference on Sunday.

After the Ellis Park match, Foster said he had “no idea” whether he would be coach of the All Blacks for their next Rugby Championship test against Argentina on August 27, live on Sky Sports.

“The reality is we’re dealing with a whole lot of different aspects of this situation which frankly we can’t share a lot and talk a lot about,” Robinson said. “So sometimes we don’t get it all right as a result of that. But it’s not through a lack of commitment to want the best for the team.”