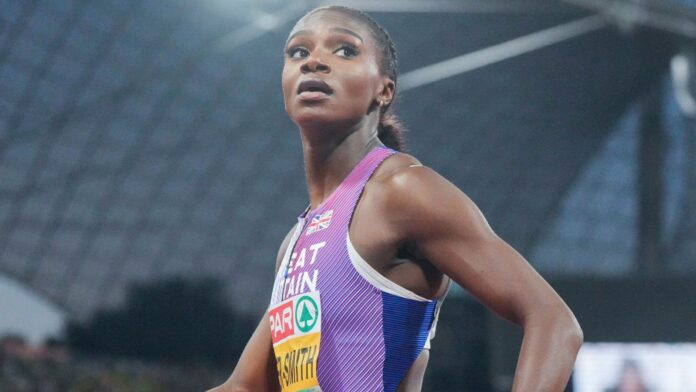 Dina Asher-Smith has called for more research into the impact a woman’s menstrual cycle in terms of assessing dips in performance for female athletes; the British sprinter qualified for the final of the 200m in Munich on Thursday

Dina Asher-Smith called for more research into the impact of the menstrual cycle on sporting performances after returning to form to book her place in the 200 metres final at the European Championships in Munich.

Asher-Smith has endured a difficult season with injuries, pulling up midway through the women’s 4x100m relay at the World Athletics Championships in Eugene with a hamstring issue which also saw her withdraw from the England team for the Commonwealth Games in Birmingham.

And in the final of the 100m earlier this week, Asher-Smith pulled out around the 60-metre mark before revealing she had suffered cramp in both calves.

The 26-year-old was back on the track at the Olympiastadion on Thursday evening in the semi-finals of the 200m, where she comfortably won her heat with a run of 22.53 seconds.

Afterwards, Asher-Smith was asked about her recovery from the cramping issues and told BBC Sport: “[It was] girl’s stuff. It was frustrating, but just one of those things.

“It is a shame because I am in really good shape, but sometimes that is not the way everything pans out.”

Asher-Smith added: “It is something which I think more people need to actually research from a sports science perspective because it is absolutely huge.

“We wouldn’t always talk about it either because you see girls that have been so consistent and there is a random dip.

“Behind the scenes they have been really struggling, but outwards everybody else is saying, ‘What’s that? That’s random’. So it could just do with more funding.

“I feel like if it was a men’s issue, we would have a million different ways to combat things, but with women there just needs to be more funding in that area.”

Fraser had battled back to fitness following a ruptured appendix and fractured foot ahead of the Commonwealth Games, where he won the individual pommel horse and parallel bars titles as well as team gold in Birmingham, his home city.

The 23-year-old recovered from an average floor routine to top both the pommel horse and parallel bars events.

“This is incredible. We have had a real big journey to get here today, just even competing on six apparatus, not many people thought I could do it,” Fraser said to the British Gymnastics website.

“There’s no doubt the all-around medal is the big one. I’ve always loved the all-around, whenever people ask I say I’m an all-rounder and now I feel like I can say that with true confidence and pride.”

Fraser also qualified for the final of the pommel and parallel bars, while Great Britain team-mates Giarnni Regini-Moran (floor, vault and parallel bars), Courtney Tulloch (vault and rings), James Hall (high bar) and Jake Jarman (floor) also made it through in the individual competitions.

There was more success for Britain in the evening’s action at the Olympiastadion, where the start was delayed by a thunderstorm, as Jake Heyward took silver in the men’s 1500m while Eilish McColgan claimed women’s 5,000m bronze.