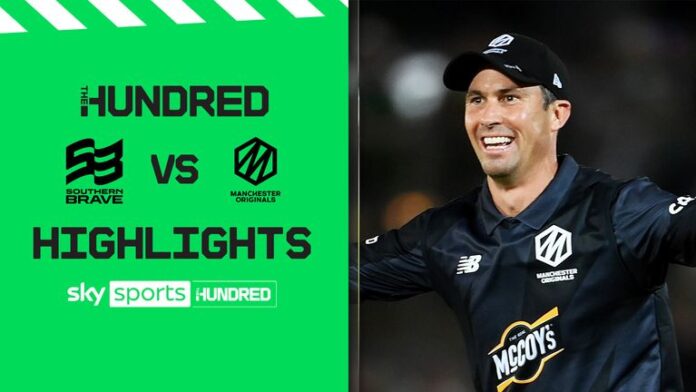 Jos Buttler and Andre Russell were both on fire with the bat as the Manchester Originals set the third-highest total of The Hundred so far in Thursday’s dominant victory over the Southern Brave.

Buttler hit 68 off 42 balls to spark a huge innings for the Originals, including five sixes with fellow opener Phil Salt scoring 38 runs.

After Wayne Madsen went for just nine runs, Russell then smacked 11 boundaries and a total of 64 runs off just 23 balls to set a huge target of 189 for the Brave.

In truth, they never looked like matching it and were bowled out for 120 runs as Paul Walter claimed a hat-trick of wickets and Tristan Stubbs and Matt Parkinson took a pair each.

Brave have claimed just one win in their opening five matches after a disappointing home defeat which all but ends their chances of defending their title.

Marcus Stoinis did not last long in his final outing for the Brave, sweeping straight to square-leg off Tom Hartley.

Matt Parkinson finished the game by getting Michael Hogan stumped as the Brave were bowled out with 16 balls to spare.

The Originals, with only one victory from their opening four matches, had earlier started slowly against the pace of Garton and Michael Hogan.

But the match burst into life in Dan Moriarty’s first set on his Brave debut. Phil Salt smashed the Surrey spinner for two fours, either side of offering a tough chance to Fuller.

Buttler was not to be outdone, audaciously scooping 41-year-old Hogan for four as the visitors reached an impressive 46 for no wicket at the end of the 25-ball Powerplay.

Just as in the women’s game earlier, spin proved harder to attack. Jake Lintott’s first set went for just two and he suckered the dangerous Salt into picking out long-off with the first ball of his second spell.

The leading run-scorer in this year’s IPL reached a 32-ball half-century shortly after Wayne Madsen had been brilliantly run out by Stoinis’ pinpoint throw.

Fellow big-hitter Russell soon joined in the carnage. The all-rounder deposited Fuller for six over mid-wicket before he and Buttler traded maximums off the unfortunate Garton in a barnstorming partnership of 51 off 25 deliveries.

Buttler’s dismissal by Hogan did little to stem the flow of runs for a depleted Brave attack badly missing the services of England stars Jofra Archer, Chris Jordan, Tymal Mills and Craig Overton.

Russell then went into overdrive as the Originals obliterated the previous best team score in the Men’s Hundred at the Ageas Bowl, recording the fourth-highest men’s score in the entire competition.

Garton’s drop off Russell summed up a tricky night in the field for the Brave before the West Indies star clubbed 24 off the final set to boost the Originals up to a total which always looked beyond the home side.

Russell said: “I’ve been feeling confident with the bat but the runs weren’t coming and I [kept] believing. Today the coach said to me, ‘Today’s your day’, and I said, ‘Well, let’s hope for the best’. And today [I] actually came out and I did what I did best. So, happy for another win, I hope that we can keep the momentum going from now.

“My strength was actually coming on and hoping to take on the spinners but when I [saw] how big the ball was spinning, [how they were] getting the ball to go away from me as well – I said to the skipper, ‘Let’s just tough it out’. If we can get a few boundaries [great], but my goal was actually to stay here to the end.

“How I was maxing it out, you know, thinking about the last 20 and try to capitalise on the seam bowling and, and we actually [got] way above par, I was actually thinking about 161-165 based on how the wicket was playing but with the power and hitting constantly boundaries, we [got] to 180 which put a lot of pressure on them.”

Friday’s games in The Hundred come from Edgbaston as the Birmingham Phoenix host the Northern Superchargers, with both men’s and women’s games available for free via a live stream on skysports.com, the Sky Sports App and the Sky Sports Cricket YouTube channel.

The Phoenix women’s side are aiming for a third consecutive win in the competition and get underway against the Superchargers, who have won one and lost one, from 3.30pm.