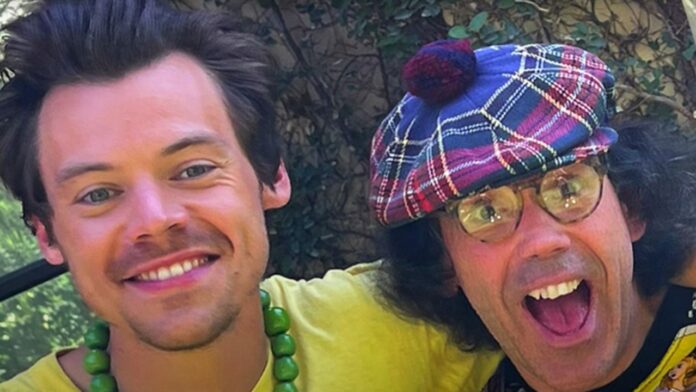 When he wasn’t performing a headlining slot at Coachella 2022, Harry Styles took a moment to chat with Nardwuar the Human Serviette. Now, Nardwuar has released the interview footage. Watch Styles and Nardwuar discuss parsnips, Joni Mitchell, Fleetwood Mac, and more in the clip below.

Nardwuar opened the interview by giving Styles one of many presents, the first of which was a vinyl pressing of Elvis Presley’s single “The Girl of My Best Friend.” Styles accepted the gift with a laugh, saying that it was “probably the first song I learned the words to, and I used to sing it in my bedroom when I was a kid.” Nardwuar also gave Styles a custom guitar pedal, a Fleetwood Mac Rumours mirror, a Peter Gabriel promotional poster from 1983, and more.

Elsewhere in the discussion, Styles reminisced about his love for parsnips. “My mum’s friend Louise grows parsnips, and they’re huge,” the singer said. “I do like parsnips.” He also recalled the time he went to a Christmas party at Joni Mitchell’s house, where he sang Mitchell’s song “River” in front of the iconic artist. Nardwuar then gave Styles a Chuck Mitchell LP (Chuck Mitchell was Joni’s husband from 1965-68).

Revisit “5 Takeaways from Harry Styles’ New Album, Harry’s House” over on the Pitch.

Sherelle Shares Track From New EP With I. Jordan: Listen