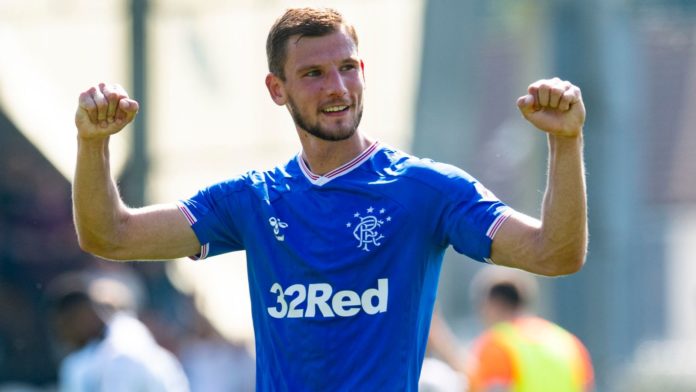 The Croatia international returned to Steven Gerrard’s side for the first time in three weeks and broke the deadlock with a dead-ball strike into the top corner just short of the hour-mark.

The victory sets up Rangers nicely for the second leg of their Europa League play-off tie against Legia Warsaw at Ibrox on Thursday.

St Mirren struck the post in the first half through Jon Obika but did not offer enough of an attacking threat.

Manager Jim Goodwin had named an unchanged team following the victory over Aberdeen a fortnight earlier.

Rangers, in contrast, made five changes from the midweek draw in Warsaw. Filip Helander came in for his league debut along with Barisic, Glen Kamara, Jordan Jones and Jermain Defoe. Out went Nikola Katic, Jon Flanagan, Steven Davis,
Sheyi Ojo and Alfredo Morelos.

Defoe had a great chance to put the visitors in front after just three minutes. Scott Arfield played in the Englishman but he slid his shot wide of goal.

St Mirren had to survive some early Rangers pressure but, in a rare foray forward, Tony Andreu blazed a shot well over the bar.

The home side almost went in front in bizarre circumstances. In shades of Daniel Candeias’ goal for Rangers at this ground last season, Obika miscued his cross and saw it loop over goalkeeper Allan McGregor and strike the far post.

The game was starting to open up and Ryan Jack saw a low driven effort deflected for a corner, before St Mirren goalkeeper Vaclav Hladky kept out Scott Arfield’s header.

Rangers were chasing a goal before half-time and had a great chance when Defoe won a free kick on the edge of the St Mirren box. James Tavernier took it but his effort struck Sean McLoughlin in the wall.

The home side then appealed for a penalty after Helander clashed with Obika but referee Kevin Clancy instead awarded a free kick to Rangers.

The visitors started the second half on the front foot and Joe Aribo’s header from a corner drifted narrowly wide of the post.

Rangers, though, made the breakthrough after 59 minutes. Calum Waters was booked for bringing down Defoe and Barisic curled the free kick high into the top corner.

St Mirren debutant Junior Morias could have grabbed a late equaliser but his weak attempt was straight at McGregor.

‘A moment of magic’

“It’s a moment of magic. I always felt that it would take a moment of brilliance from one of the front men or wide men, or a really well-executed free kick,” said Rangers boss Steven Gerrard after the match.

“Thankfully Borna stepped up and he deserves all the credit that he gets. I’ve seen him do that many times on the training pitch but it’s alright doing that when nobody’s there. You’ve got to do it in big moments so fair play to him.

“He’d be the first to admit he’s played well at times but under-performed at other times. But he got his opportunity today and took it with both hands. Not just with his free kick. I thought his all-round game was strong.”