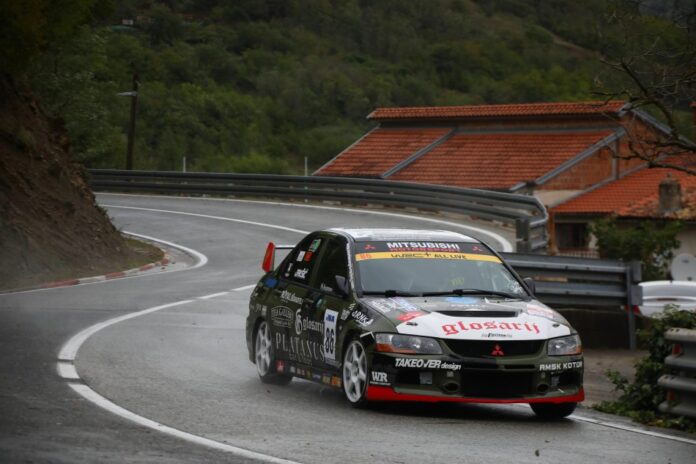 Buzetski dani in Croatia, the final round of the 2022 FIA European Hill Climb Championship season, has seen the deserved winners crowned after a thrilling day of action. The overall Category 1 title for production-based ‘closed cars’ fell to Macedonian driver Vasilije Jakšić, who recorded the sixth victory of his season in Group 4, driving a Mitsubishi Lancer Evo IX.

Having already been crowned as champion in the division, his disastrous run in Slovenia’s Ilirska Bistrica two weeks ago only impacted Jakšić’s lead in the overall Category 1 positions, cutting his lead to just seven points over Austria’s Karl Schagerl, points leader in Group 1, and Antonino Migliuolo, points leader in Group 3.

Schagerl was the fastest of all the Category 1 cars in his highly modified Volkswagen Golf Rallye, a brilliant ninth overall among the best of the Category 2 sports-prototype machinery. He was pushed hard by young Italian charger Manuel Dondi’s super-fast Fiat X1/9 but the three seconds’ margin was enough for Schagerl to keep the pressure on Jakšić who also had to take a clean victory in his class.

The other man in contention for the Category 1 crown was defending champion Migliuolo in his highly evolved Mitsubishi Lancer. In the end, the Italian became the first of the three overall contenders to blink, being beaten into second place in Group 3 by the Hyundai i30 TCR of Macedonian driver Igor Stefanovski, meaning that while Migliuolo was crowned as divisional champion he could not retain the overall title.

Jakšić however drove in exemplary fashion, weathering the pressure that Schagerl’s time put on him to finish at the top of Group 4 by eight seconds. This means that he claims his division and the overall Category 1 title in this year’s EHC.

The overall winner of the Buzetski dani came from Category 2 and for the eighth time in eight events this season it was Italy’s Christian Merli who powered his Osella FA 30 to that honour. Having already sealed the Category 2 title at the previous round, Merli elected not to run during the storm-swept practice sessions on Saturday but used every ounce of his experience to go fastest by four seconds than his season-long challenger Petr Trnka.

Fittingly, the overall podium was completed by Germany’s Alexander Hin, third placed in the overall Category 2 standings for the year and also for the event.

Competing alongside the contemporary cars of the EHC were the 30 entries contesting the fifth and final round of this year’s FIA Historic Hill Climb Championship. The overall winner – by a massive 22.277 second margin – was Italy’s Piero Lottini, finishing his championship-winning season in Category 4 in style.

Behind him in second place on the event and confirming his title in Category 1 was the Daren Mk3 of Austria’s Harald Mössler, his fourth victory from five starts in the division. Completing the overall podium from Category 5 was the Van Diemen RF82 of Frenchman Jean-Marc Debeaune, also claiming his fourth class win of the year and the division title.

Category 2 champion Brando Motti also completed a clean sweep of victories in 2022, the Italian taking his fifth victory in Category 2 at the wheel of his Porsche 911 Carrera RS in fifth place overall. Fellow Italian Giorgio Tessore had already been crowned as Category 3 champion in his Porsche 911 SC, and had to give best to Jirí Kubíček’s Skoda 130 RS in the final round, the Czech driver impressing once again in only his third appearance this season.

So ends the 2022 season for Europe’s two premier hill climb series, with deserving champions crowned in every division. It has been a year that has brought close competition and supreme dominance in equal measure across the wide spread of categories, and seen historic venues that are testament to the dedication of the organising clubs.

While the victors celebrate, the 2023 season cannot arrive soon enough.